BC Wildlife Park: A Zoo That Gets it Right

Home » Canada » BC Wildlife Park: A Zoo That Gets it Right

These days, the word “zoo” doesn't exactly conjure up positive images in my mind. I picture big cats in tiny cages; animals that would much rather be wild confined in tanks and behind thick layers of glass.

In many cases, zoos are sad places when you think about them.

Of course, not all zoos are bad, though. Like my friend Alex concluded recently, zoos that focus on the importance of conservation and education are actually really important to making sure that endangered and threatened species have a future to look forward to. Think about it — when was the last time you visited a zoo and DIDN'T learn something new or fall in love with a different animal? 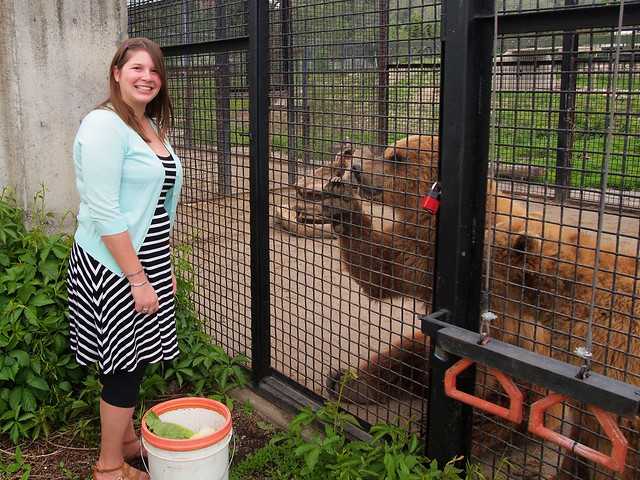 Zoos, in some cases, implement vital breeding programs, support and fund research, and offer up programs to educate people (especially the tiny, school-aged ones) about the importance of things like preserving the environment.

But I'm still often apprehensive about visiting a new zoo. I worry that it won't be one of the “good” ones.

Thankfully, going to the BC Wildlife Park in Kamloops, British Columbia, was a very positive zoo experience.

Actually, “zoo” is not the right word to describe this wildlife park. It's NOT a zoo in the traditional sense. Founded in 1965, the BC Wildlife Park is better described as a conservation and rehabilitation center, focusing solely on species that call British Columbia home. 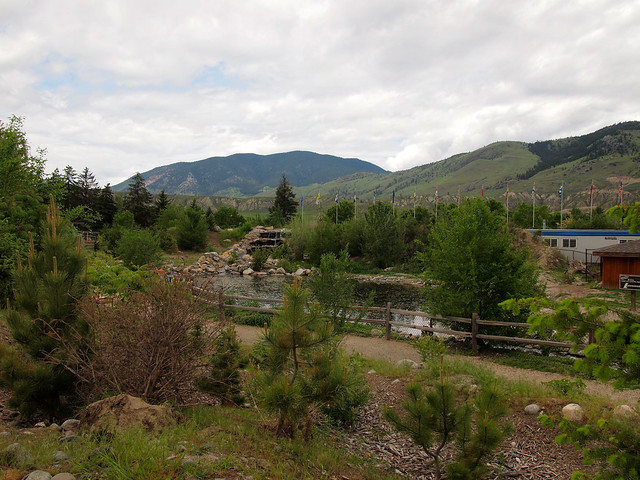 I was lucky enough to have a special behind-the-scenes visit to the BC Wildlife Park as part of my leg of the Great Coast Road Trip. Over the course of about an hour and a half, road trip buddy Stephanie and I got a unique perspective on the park and what it seeks to do for the animals it cares for.

Our first stop of the morning was to see Clover, a rare Kermode bear that has called the BC Wildlife Park home for nearly 1.5 years. These “blonde” bears are actually a subspecies of black bear in British Columbia, and are known to the First Nations people as “Spirit Bears.” 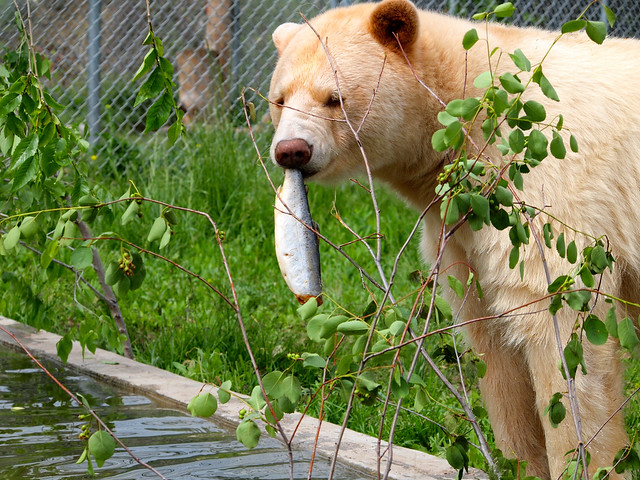 Clover was orphaned at a young age, and then began bothering people for food (who of course fed him because he's freaking adorable). This, unfortunately, is not safe for any of the parties involved. And, while Clover's transition into captivity has been slightly controversial (no other Spirit Bears exist in captivity anywhere in the world), attempts to “rehabilitate” him (AKA get him to leave people alone) failed; he was relocated twice in the wild and simply would not stay away from humans. So now the park is his home.

Clover's present enclosure is quite small and the bear is quite shy, but the park is working to change both those things. They are currently raising money to build Clover a large enclosure at the park, and they also allow special visitors like us to see him to hopefully get him used to being around people. We got to see Clover “fishing” in his pond and foraging for fruit for about 5 minutes before a rumbling golf cart scared him back into hiding. 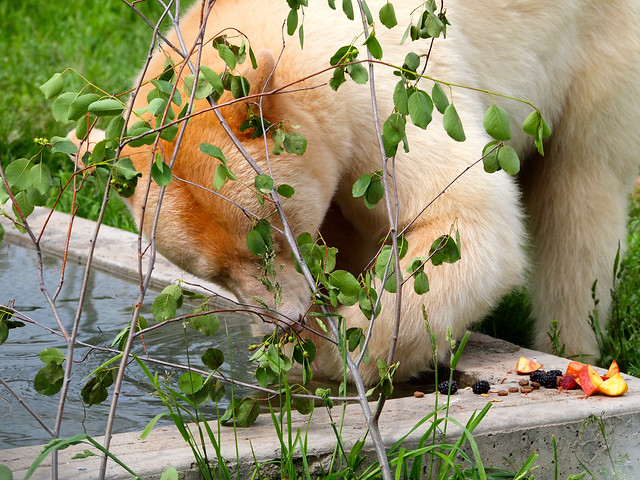 We both felt very lucky to have been able to “meet” him, however!

After seeing the Spirit Bear, we headed over to the Highland Valley Copper Amphitheater for a first run-through of the park's summer Bird of Prey flight demonstration. It was a comical show, as many of the (still quite wild) birds showed no interest in flying anywhere on cue. Gontran the overweight turkey vulture was particularly hilarious, waddling off around the corner when he'd had enough flying.

We had a chance to chat with our guide, John, here, and learn more about the park. The BC Wildlife Park is governed by a volunteer board of directors, has a highly regarded breeding program for burrowing owls, has an on-site animal hospital, and its motto is “Conservation through Education.”

“We are a rehabilitation center first and foremost,” John said. “We don't buy animals.”

Meaning that when an animal is able to be re-released into the wild, or if an older park resident dies, the park doesn't “replace” them. Nearly all of the animals currently found at the BC Wildlife Park have been rescued from one situation or another. The ones that stay at the park are those that would not survive on their own again in the wild. 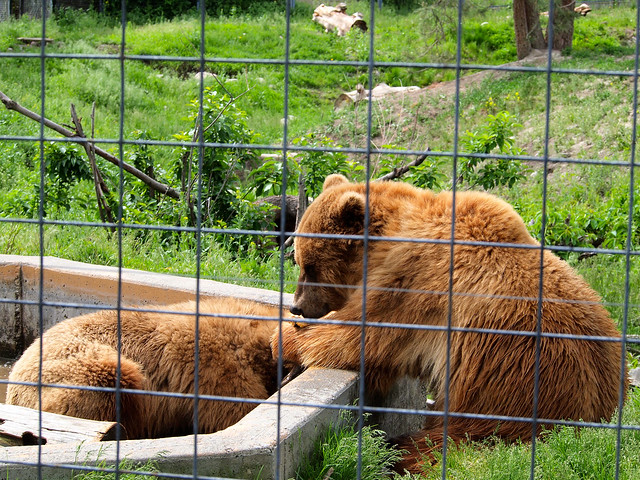 A lot of zoos make similar claims, however — making pledges to conservation and education is not unique to this wildlife park.

But, touring the park with John, I was convinced that this zoo actually MEANS it.

We spent the rest of our time at the park shadowing animal handler Danielle as she made her daily feeding rounds. We watched her interact with two older grey wolves, and observed as she hid food in Bloom the badger's enclosure. One thing Danielle stressed is the fact that none of the animals at the BC Wildlife Park are fed out of bowls — they have to work to find their food, just like their wild counterparts. 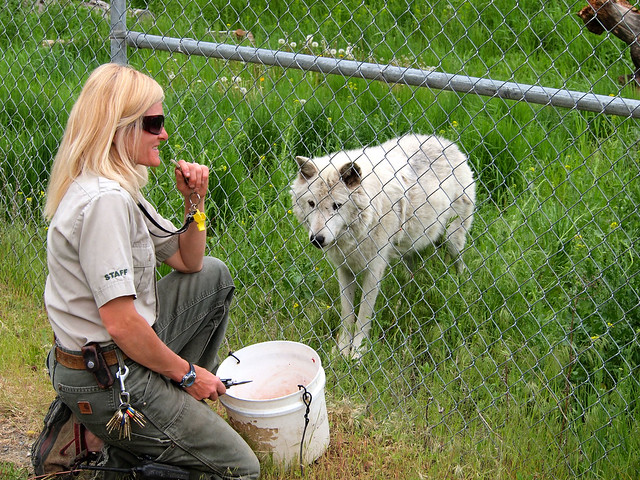 In the badger enclosure, Danielle buried food in Bloom's older dens. Earlier, we had watched Clover “hunt” a dead fish that Danielle had hidden in his pond. She also explained how she puts food for the bears up in trees, and sometimes puts meat on a line for the big cats to make them stalk it like they would in the wild.

By the time we were at the grizzly bear enclosure, Danielle had shown us how she uses food-motivated training to train even the largest animals in the park to show her their paws and teeth so she can keep an eye out for any injuries.

Feeding Dawson and Knute — grizzly siblings that came to the park as very young cubs after their mother was killed — through the fence like we did was a lot of fun, but Danielle pointed out that it's not done just to entertain the tourists. 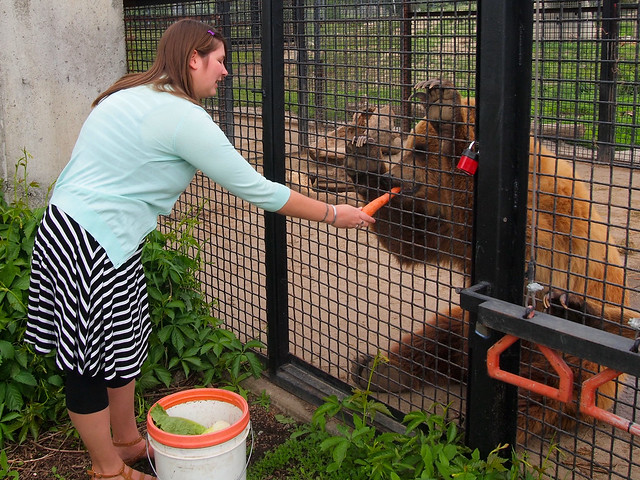 And that's the part worth mentioning again — this “zoo” first and foremost cares for its animals. The entertainment of the tourists is secondary.

For example, Clover the Spirit Bear is not yet on display to the general public. Even though he is a rare bear (in fact, the ONLY Kermode bear currently in captivity), the park is not trying to exploit him for money. I commend them for this — plenty of other zoos would have had him front and center from Day 1.

By the time we bid John and all the animals farewell, I felt really good about our visit to the BC Wildlife Park, and was actually really excited about sharing the experience with all of you.

It just goes to prove that not all zoos are bad. Some, like this one, are actually doing incredible work.

What's your take on zoos and wildlife parks?

37 Comments on “BC Wildlife Park: A Zoo That Gets it Right”