August: The Best Time to Be in Edinburgh?

Home » Europe » Scotland » August: The Best Time to Be in Edinburgh?

Ask just about anyone who's ever been to Edinburgh, Scotland what they think of the city, and you will probably get a resounding “I love it” or “It's awesome.”

Because, to be honest, Edinburgh IS awesome. And I DO love it. 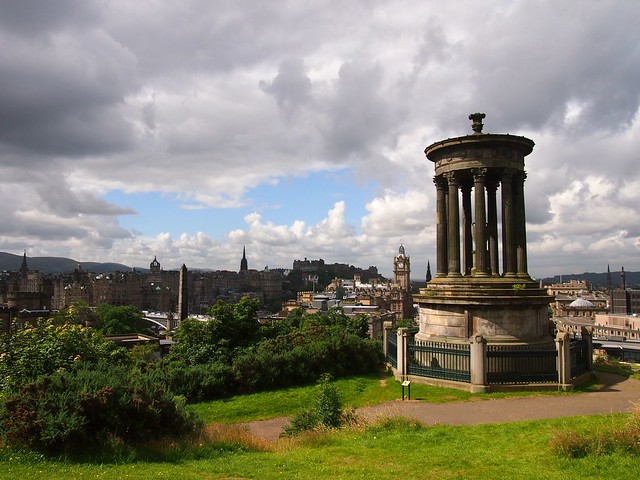 But I think my perceptions (and perhaps those of others, as well) were significantly influenced by the fact that I visited Scotland's capital for the very first time during perhaps one of the best months possible: August.

Edinburgh comes alive in August. With some of the warmest temperatures of the whole year (and even some sunshine, if you're lucky!), it's no wonder that summer is a popular time to travel in Scotland. 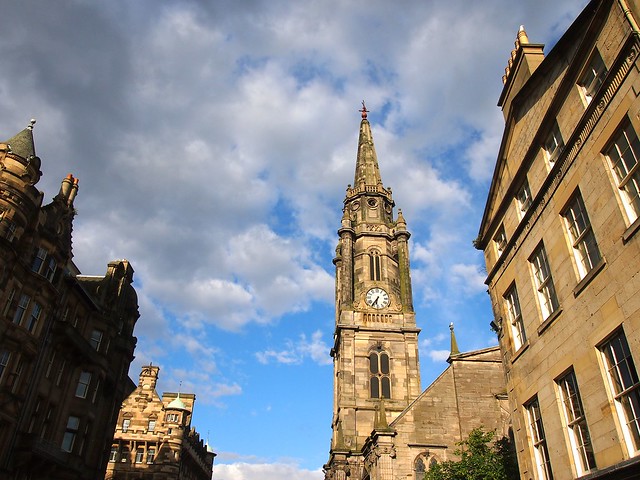 But the weather isn't the only reason August is a great time to visit Edinburgh — not by a long shot.

The real reason is the Edinburgh Festival. 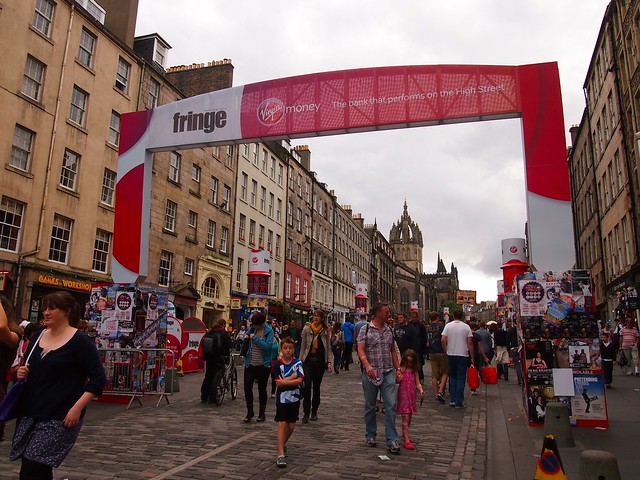 The name is actually a bit deceiving, because it makes it sound like the city only hosts one big festival each year. Not true. The Edinburgh Festival actually consists of a handful of separate and independent festivals that take place annually from late July to early September. The “Edinburgh Festival” is simply a collective term for all of them. 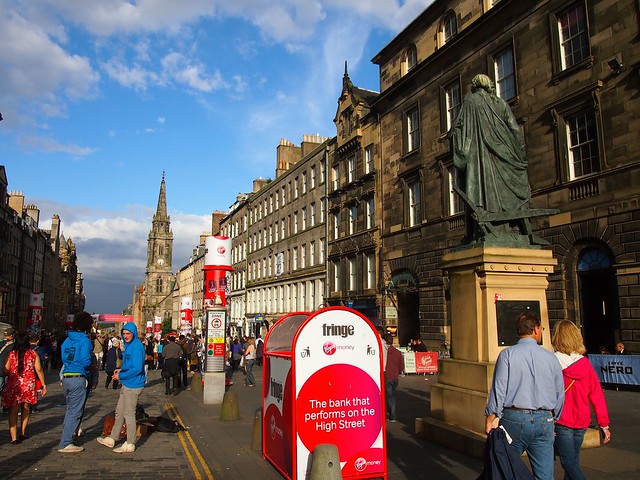 Some of the most popular festivals during this time include:

There are also book festivals, jazz festivals, film festivals, and more that all take place during or around August every year.

As you can probably imagine, I had plenty of options while I was in Edinburgh. 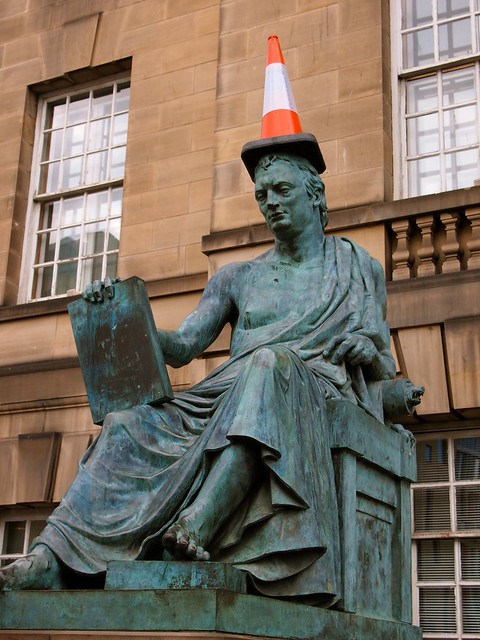 I was in Edinburgh for less than 3 days total, so I had to be choosy about how I got involved in the various festivals. I was torn between attending as many festival events as possible and doing the “usual” sightseeing around Edinburgh.

In the end, of course, I had to compromise. I visited Edinburgh Castle, climbed up Calton Hill, went to the Camera Obscura, saw the inside of St. Giles Cathedral, and took a spooky tour of the city and underground vaults after dark.

But that's where my sightseeing ended. I spent the rest of my time seeing Fringe shows, being entertained by street performers on the Royal Mile, and enjoying the Military Tattoo on a clear, crisp night.

Going to Edinburgh in August was probably the best decision I could have made. 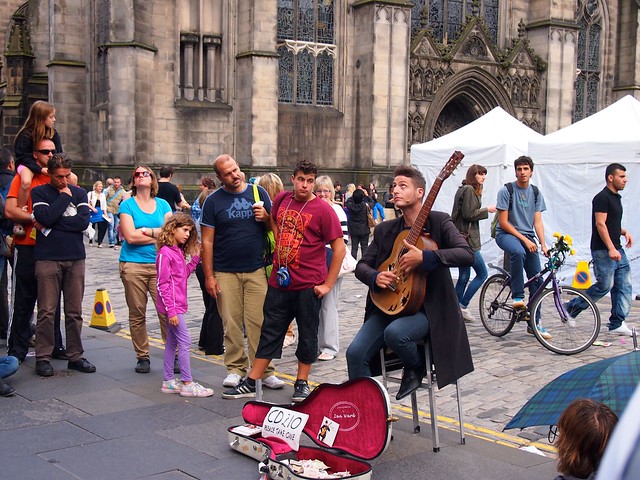 Highlights of the Edinburgh Festival for me included:

On any given day, Edinburgh's Royal Mile is easily its top tourist attraction. Even when the Festival is not on, this is the best place to go to see buskers and do a bit of people-watching. But the entertainment factor increases exponentially during the Festival each year, with thousands of people milling about the streets and everyone from magicians to comedians promoting their Fringe shows with preview-style performances. 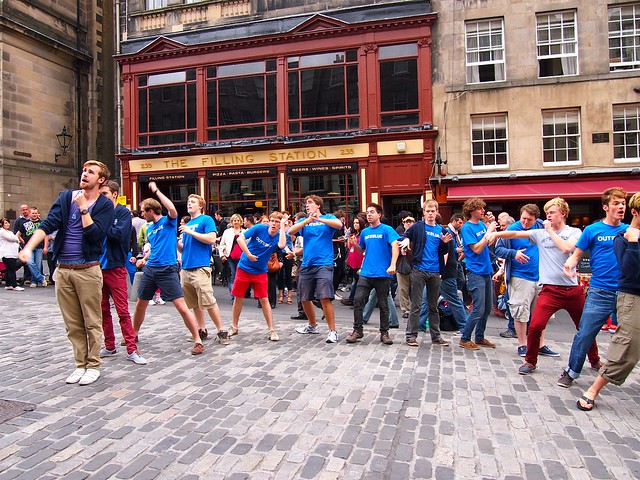 Some of my favorite street performers included a guy with a dancing marionette, a comedic juggler from New Zealand, and an amazing classical guitarist. 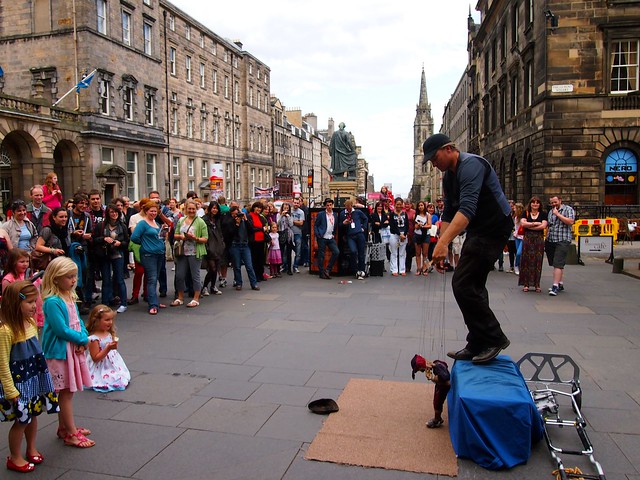 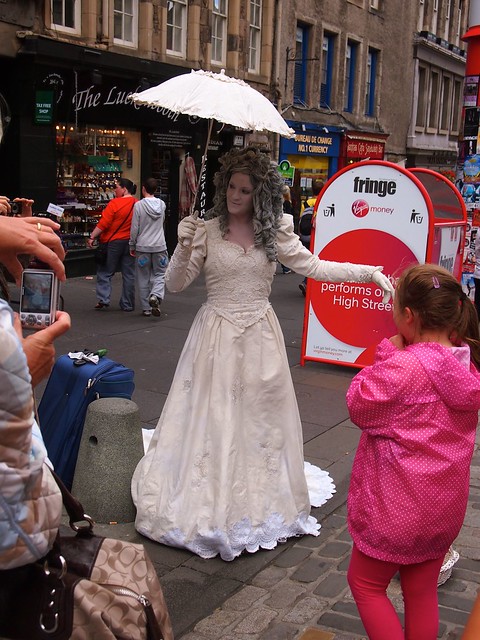 I hadn't planned to be in Edinburgh during the Fringe, but was excited to find out that I would be. Yes, being in town during this wildly popular festival meant that accommodation was pricey and difficult to come by, but it was all totally worth it.

During the Fringe, you can attend just about any kind of show you can imagine — from free comedy to burlesque to dance to children's theater. There really are shows to suit all tastes — and all budgets. With my student ID, I was able to get tickets for 3 different shows on preview days for a total of 23 GBP (about $35 USD). 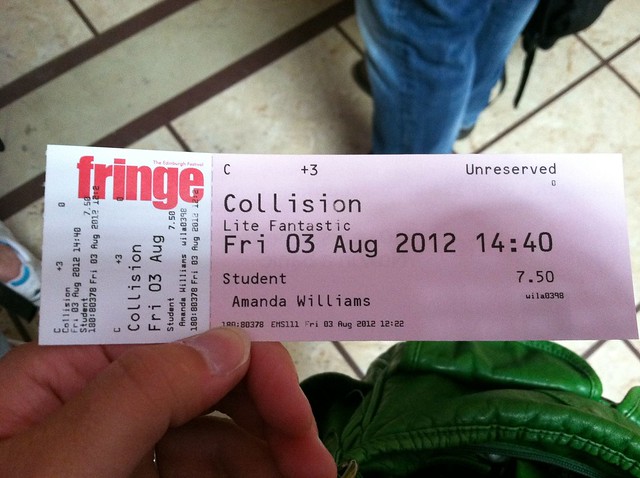 The shows I saw included: 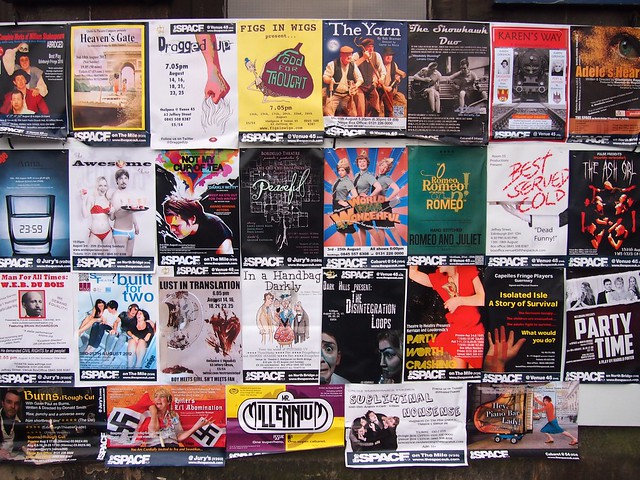 I loved the variety of shows available during the Fringe, and feel like I got a nice taste of almost everything. If I had been there for more days, I'm sure I would have seen twice or three times the amount of shows! There were hundreds to choose from in venues all over the city.

On my last night in Edinburgh, I made my way to Edinburgh Castle to see the ever-popular Royal Military Tattoo. More than 200,000 people flock to see this performance in Edinburgh each year, and I can understand why — it's freaking impressive. 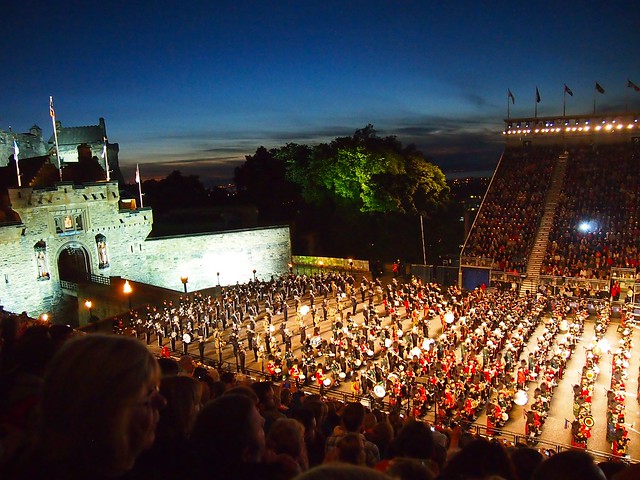 The word “tattoo” in this sense actually comes from the phrase “Doe den tap toe,” or just “tap toe,” from the Dutch for “last orders.” In literal translation, it means something along the lines of “close the (beer) tap,” and hearkens back to the days when a military regiment's drum corps (or pipe and drum corps) would play at the end of a night to signal to its soldiers that it was time for bed. 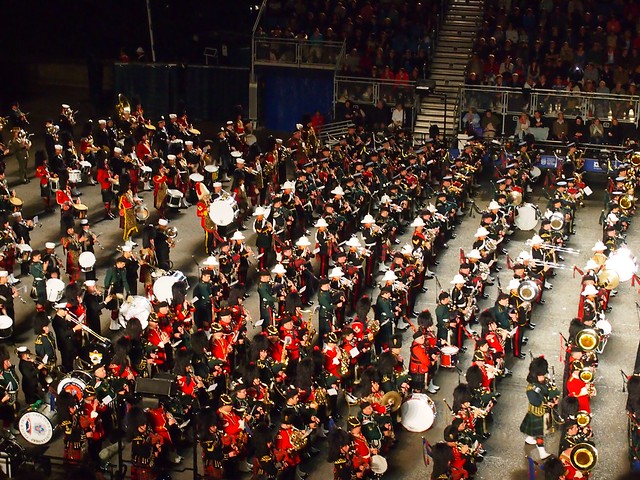 Today, the Military Tattoo is a show full of song, dance, and pyrotechnics, and is performed every night for most of the month of August. Military bands, dancers, singers, and other performers come from all corners of the world to take part in the show. My favorite parts were the gigantic pipe corps, the Swiss Top Secret Drum Corps, and the amazing Band and Drill team from the Norwegian Army. 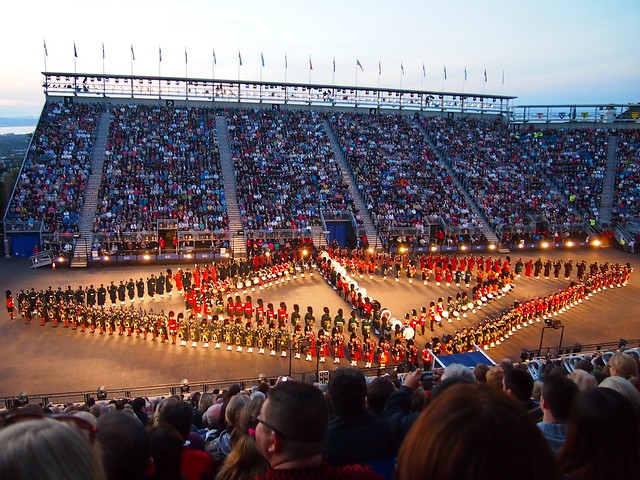 Tickets for the Tattoo aren't cheap (I paid 30 GBP for a last-minute ticket), but the show and experience, I think, are worth it. 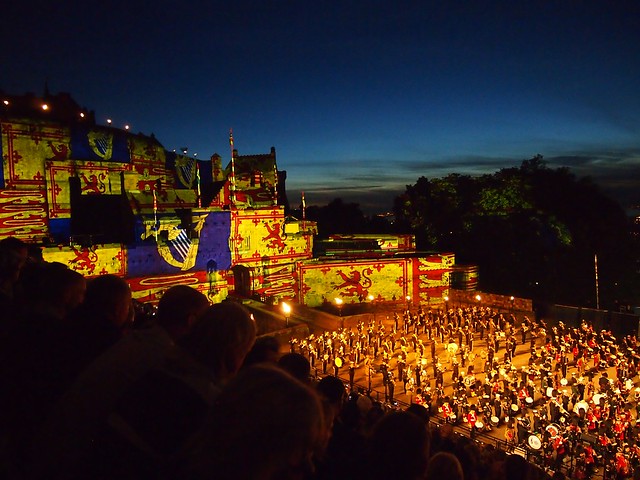 Yes, Edinburgh is crowded during the Festival season. It's loud and crazy, and definitely sometimes stays up too late. But it's also so. much. fun!

Even though Edinburgh is undoubtedly awesome at any time of year, I'm convinced that August is truly the best time to visit.

Where to stay in Edinburgh during the Festival

If you're headed to Edinburgh during Festival season, you'll definitely want to book your accommodation WELL in advance – things do book up quickly and get more expensive the closer to the Festival (and especially the Fringe) that you get.

Here are some of my favorite places to stay in Edinburgh:

Mid-range hotel in the Old Town: Holiday Inn Express Edinburgh Royal Mile – I like this hotel on Cowgate because it's close to the Royal Mile, and yet not super noisy. The rooms are bright and clean, the free wifi is fast, and you usually get free breakfast with your booking. (Read reviews | Book here)

Apartment in the Old Town: Destiny Scotland – On my last visit to Edinburgh, I rented a one-bedroom apartment on George IV Bridge through Destiny Scotland. The apartment was gorgeous, and I had a view of Edinburgh Castle from my kitchen window! Definitely my favorite place to stay in Edinburgh thus far. (Read reviews | Book here)

Luxury hotel in the Old Town: Radisson Blu Edinburgh – If you want to stay right ON the Royal Mile, check out the Radisson Blue with its contemporary rooms. (Read reviews | Book here)

Close to the train station: Mercure Edinburgh City – Princes Street – I've stayed at this hotel twice when I had an early train to catch at Waverly Station. The hotel on Princes Street is clean and comfortable, and a great option if you don't care about staying in the Old Town. (Read reviews | Book here)

How to get Edinburgh Festival tickets

Lastly, here are some useful links in case you'd like to get some Edinburgh Festival tickets for yourself:

I highly recommend booking tickets for the Tattoo in advance, which you can get tickets to other many festival shows the day-of.

READ NEXT: Hogmanay in Edinburgh: The Most Epic New Year's Celebration

Have you ever visited Edinburgh during the Festival? Would you want to? 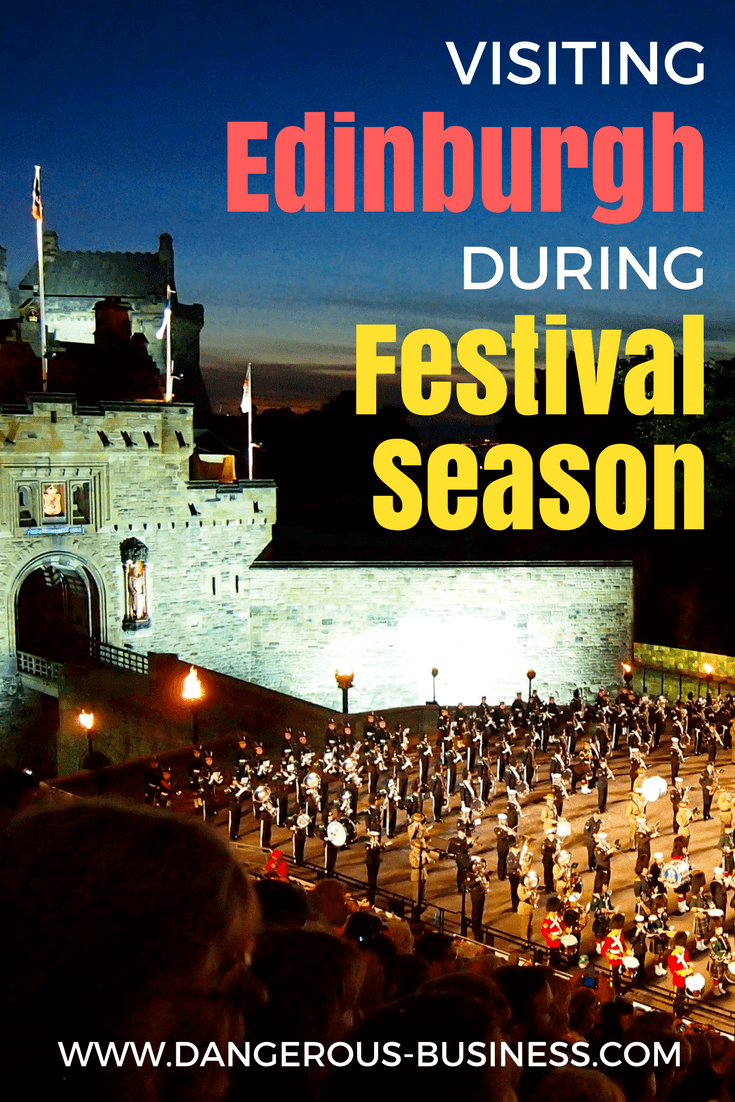 34 Comments on “August: The Best Time to Be in Edinburgh?”