Screamster for a Night at Cedar Point’s HalloWeekends

I went to Cedar Point on a cool Saturday afternoon looking relatively normal. But, a few hours later, I was looking like a monster.

No, literally. A monster. 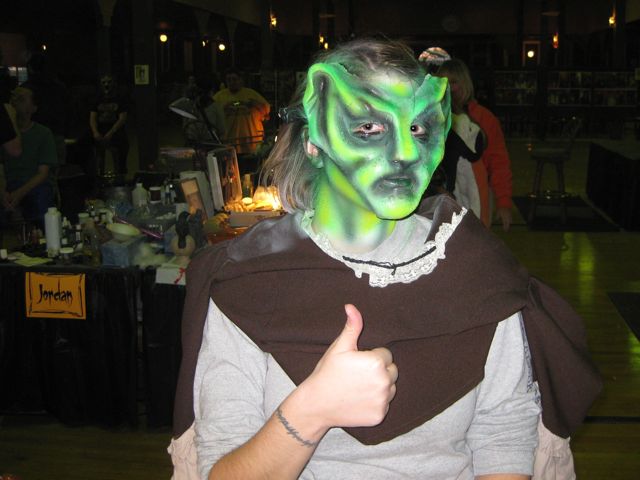 This was all part of the plan, of course.

Back in September, I went to Cedar Point one soggy evening to preview the park’s 14th-annual HalloWeekends festivities. For seven or eight weeks each fall, the amusement park stays open on weekends, with rides, haunted houses and “scare zones” all filling the park with screams.

At the conclusion of our spooky preview of this year’s new attractions, Director of Public Relations Robin Innes invited any and all of us back once HalloWeekends got into full swing to be transformed into creatures of the night for the evening.

I decided to take him up on it.

I sauntered into “Haunt Central” (the ballroom located in Camp Snoopy) around 6 p.m. with Jason, my designated camera man for the evening. We were met by slightly perplexed looks when we said we were there to be transformed into Screamsters — HalloWeekends employees — for the evening.

“Tonight, of all nights? Good luck,” we were told by one female Screamster who was having her makeup done nearby.

As we went over to the costuming area to pick out our duds and then over to our makeup chairs, it seemed everyone was in agreement — it was going to be one heck of a night to be introduced to life as a Screamster.

Being employed at Cedar Point during HalloWeekends is not like being employed at the park any other time of the year. Screamsters are hired with one goal in mind: to entertain (okay, okay, to scare) the guests.

But it’s not an easy job.

And, we were told, it would be especially trying on this night, when Cedar Point was on track to set attendance records. (Jason and I could attest to this, seeing how we had waited in line for an hour and half earlier in the day for the Magnum 200 XL. The Magnum. Not even the top coaster in the park!) As I sat down in makeup artist Jason Gotsch’s chair, the nerves began to kick in. The young artist was lightly airbrushing a mask, tearing off bits here and pieces there so it would fit me.

And then he started gluing it onto my face.

I’m not a complete stranger to stage makeup; I did my fair share of school musicals in high school, after all. But creature makeup is completely different. The mask Gotsch was gluing onto my face felt more like a fleshy extension of my cheeks than your typical rubbery mask. The glue he was using was heavy-duty. And when he began airbrushing on colors and textures, I realized that this was the real deal.

This year, roughly 300 Screamsters are being transformed into monsters, zombies and vampires three nights a week by a team of about two dozen makeup artists. Our makeup artist, Gotsch, has been doing makeup for HalloWeekends for the past three years. He has a day job, but doesn’t mind sacrificing his weekends for the greater spooky good. At the next table over, Bren and Vern Rockwell, whom I met on my first trip behind the scenes at HalloWeekends, have also been lending their creative talents to Cedar Point for the past three years. And Karen, an artist who would help Jason and I de-monsterfy later in the evening, has been doing (and undoing) creature makeup for eight seasons.

Even though it’s just a weekend gig, for the makeup artists and the Screamsters they work on, HalloWeekends is much more than just a part-time way to make some extra cash. It’s a job, and one that they all take seriously.

After being quickly transformed into colorful creepers, Jason and I headed over to the other half of the large ballroom, where the “monster pep rally” was set to take place. This began with some fun, upbeat music, with creatures of all shapes and sizes moonwalking and bouncing around to the likes of Flogging Molly.

But then things got more serious.

Huddled up in a big mass of masks and makeup, the Screamsters chanted their motto in a rising crescendo, culminating in rousing cheers, jumping and a whole lot of dedicated energy. I had no idea being a monster was so intense.

It got even more intense as we all began piling out of Haunt Central and heading for the midway. There, under a large projection screen, the whole group bowed down solemnly (and slightly creepily) before “the Overlord,” who further pumped the group up and welcomed Cedar Point guests to the haunted houses and scare zones, telling them to enter if they dared while cameras flashed all around us.

And then we were unleashed.

Monsters began running in all directions, and Jason and I did our best to keep up with others we knew were headed to the Fright Zone — the scare zone in Frontier Town where we would be stationed. Here, creatures of all shapes and sizes began noticing that Jason and I didn’t belong. With most Screamsters having the exact same masks and makeup from week to week, we newcomers stuck out like sore thumbs.

“What a night to be initiated,” one Screamster told us in his character’s gravelly voice. “I hope they at least gave you guys whistles?”

He was about the fifth person to ask us about the little red whistles, which every Screamster is given and instructed to blow in case of emergency.

I became acutely aware of my own, tucked safely in my pocket. We wouldn’t really need them… right?

“You’ll probably get groped,” I was told. “And if you’re going to get up in someone’s face, get out real quick. People will take swings at you.”

My eyes met Jason’s behind our masks, and I could tell we were both thinking the same thing: “What have we gotten ourselves into?”

Then the lights went out.

The Fright Zone was so crowded at first that there was little for any of us to do except simply stand there and do our best to look menacing.

“I’ve never seen it this crowded,” a Screamster who calls himself “Hands” told us. “And I’ve been doing this for years.”

While the crowd slowly thinned, Jason and I used the time to observe the Screamsters around us. Even though they couldn’t yet take up their normal positions or utilize their normal scare tactics, every single one of them remained in character. “Lula” asked people to move along in an orderly fashion by relentlessly mocking them. “Hands” stood on a hay bale and yelled. Another Screamster, dressed in a tattered dress and apron, banged on a cookie sheet with a wooden spoon and chased after slow-movers. Once things calmed down, Jason and I were stationed under an eerie spotlight along the scare trail. When park-goers approached the bright light, they weren’t able to see us.

But we could see them.

We spent an hour darting out from the manufactured fog and popping up in front of startled park-goers, making them jump, scream, or run away. No one tried to hit us, grope us, or do anything worse than yell “Boo!” back in our faces.

It was an incredible amount of fun.

But hard work, too. After just an hour, my feet were sore, my back hurt from bending over in the shadows, and my voice was starting to get hoarse. I have a whole new appreciation for the people who do this for hours on end.

I can understand why they do, though. Being behind a mask and heavy makeup allows you to become someone – or something – other than yourself. It’s oddly liberating, in a way.

And making people scream is pretty fun, too.

As Jason and I walked back to Haunt Central together, park-goers approached us to ask for photos. We tried to tell them we weren’t really Screamsters, but it didn’t matter. To them, we were monsters stalking the foggy midway after dark. To them, we were Screamsters. Which was the whole point, of course.

So we posed for a photo, doing our best to channel the Screamster attitude we had gotten a brief taste of that night. We glared. We glowered. We stayed in character.

And then we smiled behind our masks.

Because, even though no self-respecting monster is supposed to smile, HalloWeekends really is all about fun. Frightful fun, perhaps, but fun all the same.

HalloWeekends runs every weekend in September and October at Cedar Point in Sandusky, Ohio.