Resolutions for Life and Travel in 2014

Home » Blogging » Resolutions for Life and Travel in 2014

I've always thought I was a bit weird because I love lists. Any kind of lists, really, but especially to-do lists. I like making lists, because it usually means crossing things off of them — and therefore feeling quite accomplished when I do. But I suppose enjoying a feeling of accomplishment and productiveness doesn't make me weird. After all, I know a lot of other people who like lists, too. And I know a lot of people who make lists around this time each year.

Ah, the New Year's Resolutions list. Don't lie and pretend like you don't make a list each year too, if only mentally. We all do it, even if we say that we are totally against only making resolutions and vowing to change once a year.

I usually don't write my resolutions down. This year, though, why not share them? Writing down your resolutions makes you more accountable for them. And writing them down online, knowing that tens of thousands of people read this blog each month? Yeah… that's accountability.

So I give you my Resolutions for Life and Travel in 2014. 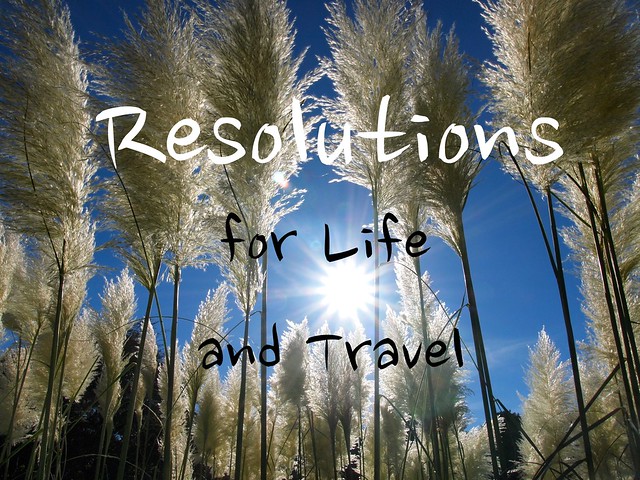 Be conscious of the length of my trips — Now that I've got a steady (and fantastic) relationship in my life, I want to be more conscious of how long I disappear each time I go away. I'm lucky that I'm dating someone who is supportive of what I do, but I realize that I also need to make some compromises in order to make things work since he can't up and leave whenever he wants like I currently can. You probably won't see me traveling for longer than 3-6 weeks at once in 2014 for this reason!

Travel closer to home — An easy way to keep the above resolution will be to travel closer to home more often. It's something I want to do more of, anyway, since there's SO MUCH to see in North America. The U.S., Canada, Mexico… I've barely even scratched the surface of any of them. I have a feeling some long-weekend getaways to places within driving distance are in the cards for this year.

Visit friends more often — I have friends literally all over the U.S.: Santa Fe, Los Angeles, Chicago, Alabama, South Carolina… All of my best friends have fled Ohio, and I want to follow through on promises I've made to visit them this year. Not only will it be great to see them, but we can have some local travel adventures, too!

Be proactive about finding freelance work — I'm under no delusions that I can turn travel blogging into a full-time career. It's incredibly hard. But categorizing myself under the larger umbrella of “freelance travel writer”? Well that just might work. I've picked up a couple of freelance jobs within the last 6 months (everything from writing to website management) and need to track down a few more steady opportunities soon. Once I get back from Asia in March, I'll have those annoying things called bills to pay again, and it would be great if I didnt't have to give up being my own boss.

Think outside the box — This kind of goes along with the above, but I want to get more creative this year about what I can do with the skill set I have. I'll be trying this out soon with a travel blogging course, and have a few other nebulous ideas of how I can employ myself creatively this year.

Find a better work/life balance — If I don't have anything else to do, there are some days that I work 10+ hours a day on blogging/freelance stuff. This isn't healthy (seriously, I've gotten too fat for most of my pants in the past few months), and also keeps me from having time for any other hobbies. This year, I want to limit myself to normal work hours (or at least close-to) and “turn off” in the evenings and on weekends.

Pay off my credit cards — I've collected a bit of credit card debt in the last few years from traveling, moving multiple times, and being in grad school. (I have some student loans, too, but we won't talk about those yet.) In 2014, I want to pay off the credit card debt I have, and start stashing some money away in savings instead.

Learn to cook (and force myself to do it) — Despite my grandma being an avid cook and baker, the love of cooking did not get passed down to me. I don't know that I'll ever *love* cooking, but I at least would like to be able to make some decent dishes. And, since I'll hopefully still be working from home once I move into a new place in March, it should mean plenty of time to try out some recipes in the afternoons.

Get in shape again — I hate gyms. I hate treadmills and lifting weights. But there are, in fact, other ways of getting in shape. I want to find a local dance class once I move (last year I signed up for an adult tap dancing class and it was SO good to get back in my dance shoes!). I want to find a good, challenging yoga class. I want to use the hula hoop my sister bought me last year to both learn some cool tricks and get a good workout. And, if the boyfriend has anything to say about it, I may just end up at a karate class or two (I suppose it's inevitable when you're dating someone who people legitimately address as “Master”).

Looking back at this list, it actually seems achievable. But the list is here to hold me accountable, and remind me of where I want to be a year from now. Here's to a successful, fulfilling 2014!

Tell me: what are some of YOUR resolutions for 2014?