How and Where to Find Beautiful Lupins in New Zealand

For about 4-5 weeks at the end of each year, the center of New Zealand's South Island bursts into color – purple and pink and blue and yellow lupins sprout up along lake sides and in riverbeds in Mackenzie Country, making the already-stunning views even more incredible.

The story goes that the wife of a local farmer decided the drab center of New Zealand's South Island could use some color. So for years she secretly spread lupin seeds along the roadways and riverbeds each spring; some more embellished versions of the story have her doing so while riding naked on the back of a white stallion.

I'm not sure if ANY of that story is true (the naked-on-a-white-stallion part definitely isn't), but there's no denying that the Russell lupins DO add a pop of color to countryside that is otherwise a bit colorless.

The ironic part? The Russell lupin is actually considered an invasive species by New Zealand's Department of Conservation.

Talk about a pretty weed!

This was my fourth trip to New Zealand, but my first one during lupin season. So of COURSE I had to go lupin-spotting! My friend Liz and I made it our mission to get some unique shots (or, at least some really pretty ones), driving from Wanaka to Mount Cook and back on the lookout for lupins.

I think we definitely succeeded.

Here are some tips for lupin-hunting in New Zealand, should you like to follow in our footsteps.

1. Go at the right time of year

The lupins technically bloom from spring to summer (September-February) in New Zealand, however “peak” lupin season in Mackenzie Country is usually from mid-November until just after Christmas. The lupins at Lake Tekapo are best in late November, while the flowers hit full bloom a little later the further south you go.

If you're visiting outside this time of year, I'm afraid spotting lupins won't be likely.

2. Know where to look

Telling you to go to “Mackenzie Country” is really quite vague, I realize. Some of the best places to look for lupins in New Zealand include:

***All of my photos were from these areas.

Please, please, PLEASE, be careful when you're lupin-spotting. There are often beautiful patches of them along the side of the road, but DON'T just stop in the middle of the road to snap a photo. New Zealand's roads are often narrow and twisty, and you should ONLY pull over when it's safe (preferably in designated pull-off spots).

There are TONS of lupins growing along the Ahuriri River near Omarama, but there are also DOC-provided pull-outs and parking/camping areas – use these instead of the side of the road!

RELATED:  DOs and DON'Ts for a New Zealand Road Trip

Even though they are technically a weed, part of me secretly hopes they aren't ever able to completely eradicate the lupins in New Zealand. Because, damn, do they make for some awesome views!

Where to stay when lupin-spotting

Like I said, you really can spot lupins all over the South Island and especially in the Mackenzie Basin in early summer. But if you're road-tripping it and want to take some time, here are some good options for where to overnight:

Lake Tekapo – Three Rivers Lodge for its floor-to-ceiling windows with views out over the lake. (Read TripAdvisor reviews | Book here)

Wanaka – My picks in Wanaka include the Wanaka View Motel and The Moorings Motel and Apartments because of their lake views and how close they are to the town center.

Crown Range Road – The Cardrona Hotel because of its atmosphere. (If you don't stay here, at least stop by for a bite at the hotel's iconic restaurant.) (Read TripAdvisor reviews | Book here)

READ NEXT: New Zealand Road Trip: The Perfect Itinerary if You Only Have 2 Weeks

You also will want:

Would YOU want to go lupin-hunting in New Zealand? 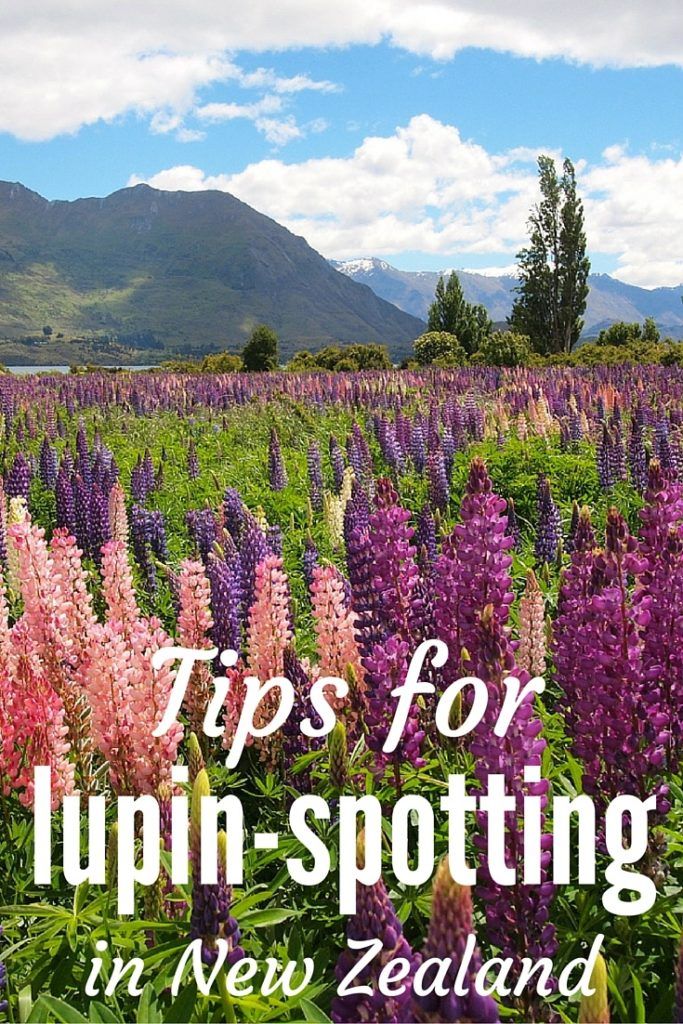