Get to Know Elephant Nature Park

I want to tell you the story of an elephant named Jokia.

Like many “domesticated” elephants in Asia, Jokia hasn't had the easiest of lives. She's one of many elephants that was forced into the brutal logging trade at a young age, which was legal in Thailand up until 1989. Even after logging was banned, however, the practice continued illegally for decades (and still happens in far northern Thailand and Burma).

Being forced to work in the logging industry — where elephants live in chains and are frequently injured by the back-breaking work — is bad enough, but Jokia suffered more than just physical pain. She became pregnant at some point, but miscarried her baby while on the job. Her mahout would not allow her to stop working to see if her baby was dead or alive, however. This caused Jokia a tremendous amount of emotional pain, and she refused to go back to work. Her mahout then punished her by deliberately blinding her in both eyes.

Sadly, Jokia's story is not unique among working elephants in Thailand. 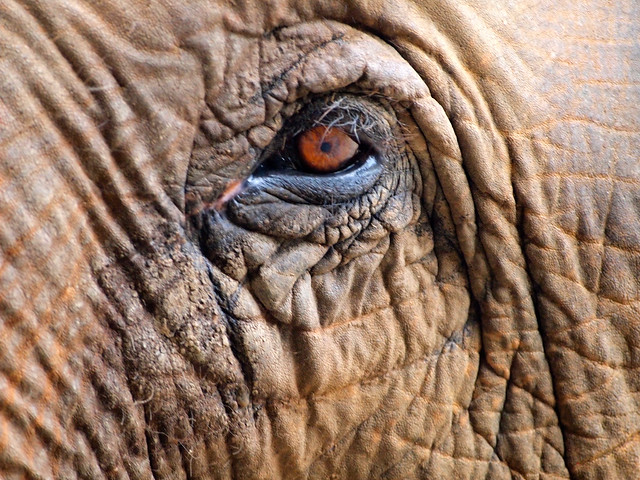 But Jokia's story doesn't end there. Despite what she's been through, Jokia will have a happy ending thanks to Elephant Nature Park, a sanctuary for injured and abused elephants in northern Thailand.

I met Jokia — now somewhere between 50 and 55 years old — at ENP earlier this year. She has called the park home since being rescued from logging in 1999, and in the past 15 years has developed confidence in her new, safe surroundings. She gets around today with the help of her best friend, Mae Perm, another rescued elephant. The two have a beautiful friendship, with Mae Perm always reassuring Jokia with light touches of her trunk. 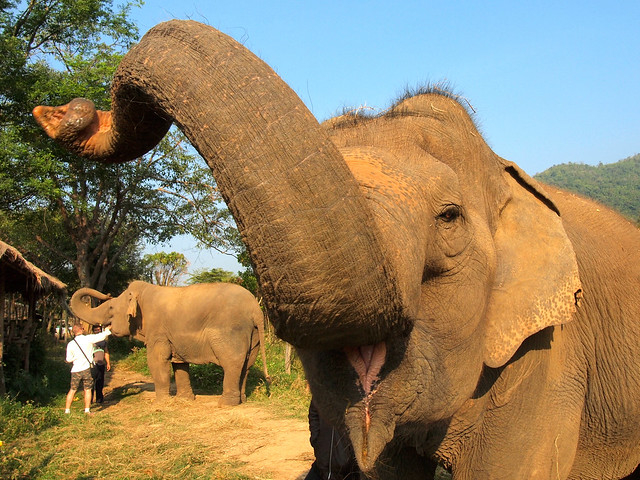 Before I visited Elephant Nature Park, I had only a basic knowledge of the plight of the Asian elephant, and hardly any knowledge at all about how elephants live and form relationships.

For example, did you know that elephants form familial and social bonds that can last a lifetime? I didn't. Elephants have best friends. They mourn the deaths of others they knew. And their family groups are so tight knit — and a female elephant's mothering instinct is so strong — that sometimes ALL the females in the group start producing milk when a new baby is born.

A week volunteering at Elephant Nature park taught me all of this and more. It opened my eyes to how smart, sensitive, and full of personality these gentle giants are.

And it also made me sadly realize what a lot of them have gone through to get here.

There are currently 39 elephants who call Elephant Nature Park home (soon to be 40+, I'm told). All were rescued from hard lives — lives of back-breaking logging work, lives of street begging, lives of performing circus tricks, lives of carrying fat tourists around on their backs… Many of them have stories just as sad as Jokia's.

There's Mae Keow, who worked in both the logging and trekking industries before being rescued by ENP. She had lived a majority of her life in chains. When she was rescued and brought to the park, she was terrified to move around, not knowing how to walk or eat or sleep without those chains.

There's Sri Prae, who lost part of a foot after stepping on a landmine while working in the illegal logging industry along the Thai/Burma border.

There's Medo, who suffered a broken ankle (that never healed properly) while working in logging, and then was forced into a brutal breeding program that left her with more broken bones and a dislocated hip. Today, her slanted back, protruding hip, and shortened leg are unmistakable.

There's Mintra, who only knew a life of street begging before being rescued. When she was about 4, she was hit by a car and her hips were dislocated, leaving her handicapped for life.

And there's Faa Sai, who was taken away from her mother at a young age and “trained” to perform circus acts. She tried to kill 5 mahouts before the age of 5. 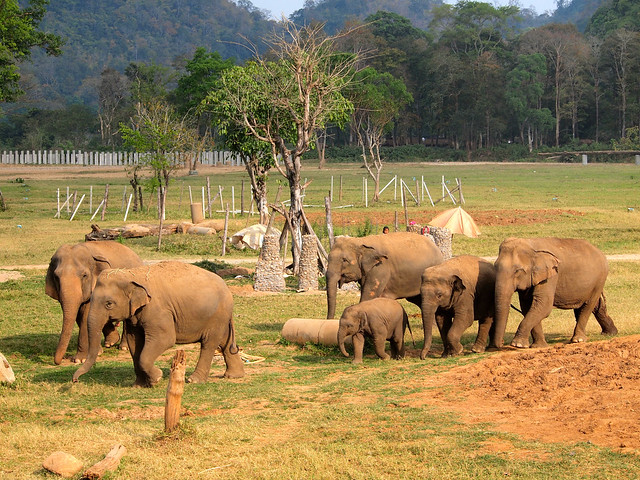 I could go on and on with these stories — every elephant ENP rescues has one. There are landmine victims, elephants with imporperly-healed broken bones, elephants blinded by circus spotlights, elephants that arrived at the park starving or with life-threatening infections… And they all have suffered emotional trauma.

Thankfully, though, while the saying goes that “an elephant never forgets,” it appears that they DO, in fact, move on.

Sri Prae surprised everyone and gave birth to baby Navann in 2012 (nobody knew she was pregnant when she was rescued), and is now helped out by Mae Kham Paan since her injury prevents her from keeping up with her baby.

Mintra, despite her dislocated hips, is now a mother to a beautiful baby boy named Yindee.

And Faa Sai is part of a large family group and has not tried to attack a mahout since being rescued from the circus in 2007. 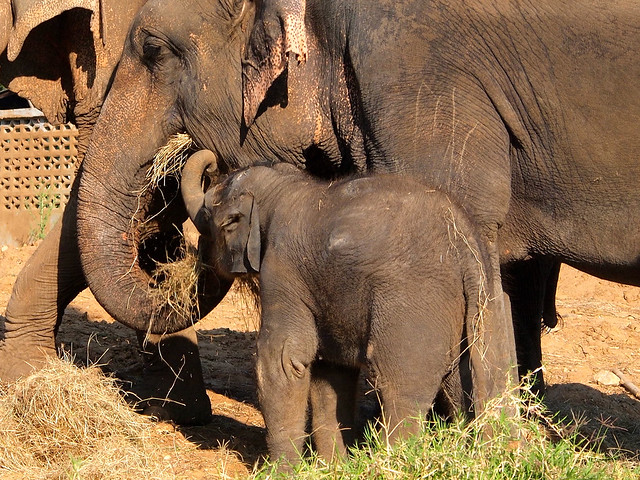 It's true that all of ENP's elephants have sad beginnings to their stories. But, just like Jokia, I think they will all wind up with happy endings.

It's all about the elephants

Elephant Nature Park is part of a larger body called Save Elephant Foundation, which is a Thai non-profit dedicated to helping Thailand's captive elephant population. The organization rescued its first elephant, Mae Perm, in 1992, and has since gone on to rescue dozens more elephants across three countries. 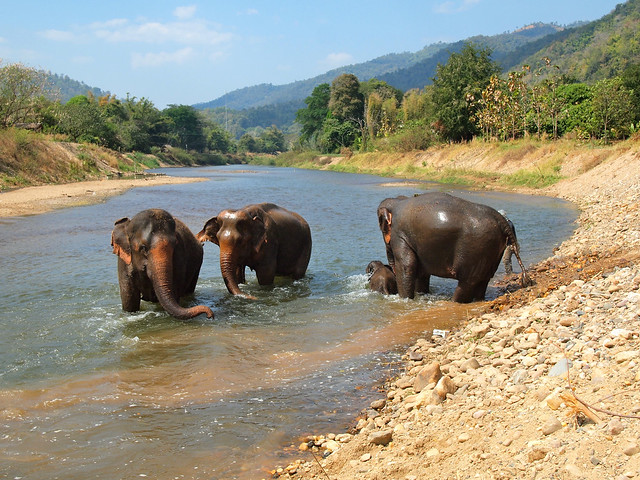 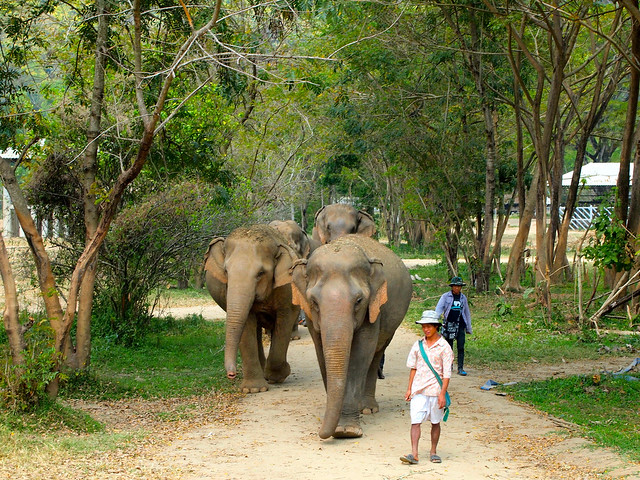 The organization was founded by Sangduen “Lek” Chailert, an incredible woman who has dedicated her life to the wellbeing of Asian elephants, despite the strain and stress it has put on her life and relationships. She has been disowned by her family, blacklisted by the Thailand Tourism Authority (for showing videos to tourists of the brutal phajaan ceeremony), and has even had threats made on her life. Some might wonder why she persists — but they only need to see her interacting with the elephants to understand.

This woman LOVES elephants, and has unselfishly dedicated herself to be their voice. 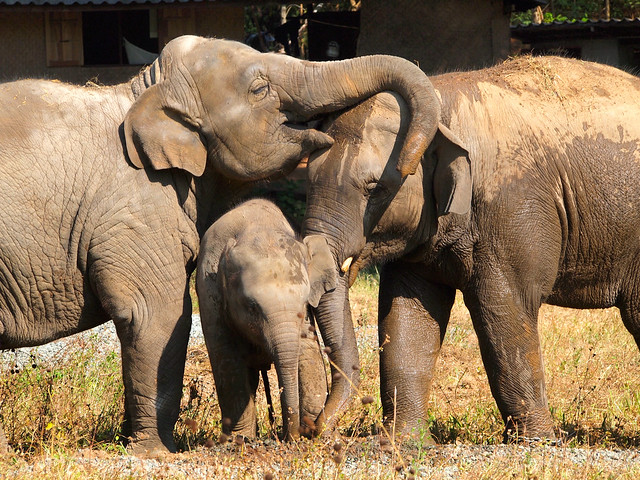 But that means that, even though ENP is dependent on visitors and volunteers (and on generous donations by animal activists like Bob Barker of “The Price is Right” fame), the ultimate goal is to make the park meet the needs of the elephants.

Today, a typical day visit to the park will include a guided tour of ENP to allow you to get to know some of the elephants, a video screening about the park, a delicious all-vegetarian buffet lunch, the chance to feed the elephants at the viewing platform, and elephant bath time, which is usually everyone's favorite part of the day. 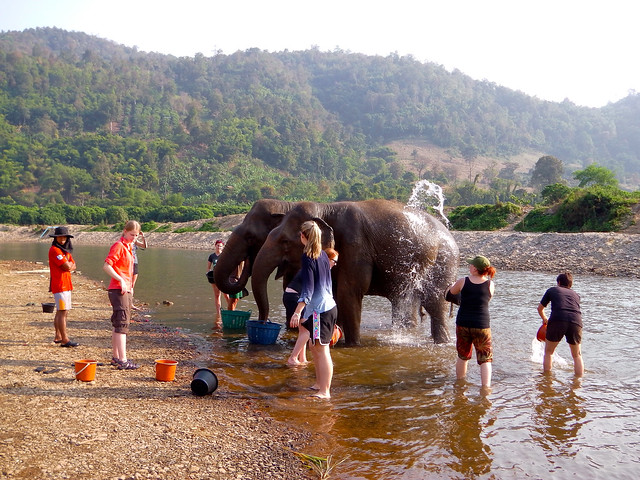 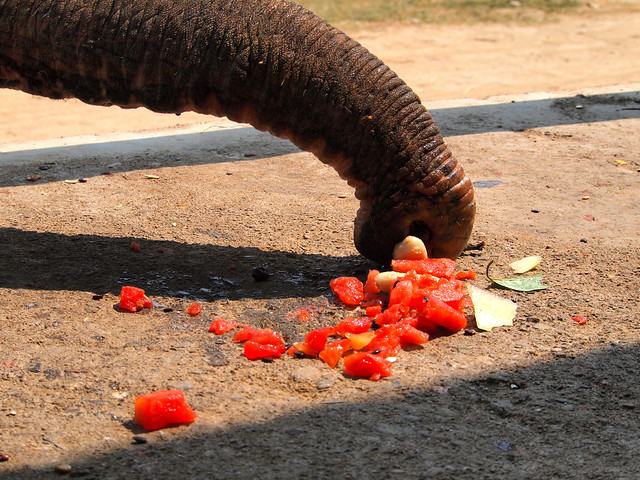 But, in the future, this may change.

The Future of ENP

I volunteered at Elephant Nature Park for a week, and had the chance to spend some extended time with Jodi, resident elephant expert at the park. We of course talked a lot about the elephants and their relationships with one another — the “gossip,” as Jodi calls it — but we also chatted about where the park is headed.

Right now, although the park is serving its mission to educate people about the plight of elephants in Thailand, it is still not providing the ideal experience for visitors OR elephants, Jodi says. 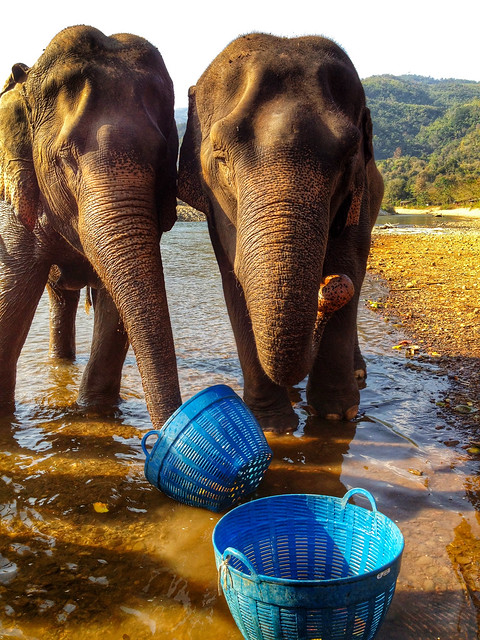 Ideally, one day, the park will be completely hands-off. Day visitors and volunteers will be restricted to smaller numbers, and there won't be any more mandatory bath times or or meet-and-greets. And you definitely won't be feeding elephants by hand. Visitors will simply get to observe the animals interacting naturally from extended systems of skywalks.

At first, I am a bit uncertain of this master plan that Jodi lays out. But, as we sit in a field and watch baby Doc Mai climbing all over her big brother and trying to sneak into a nearby field of crops, I totally understand. Sitting and observing is WAY better than depositing bananas into trucks. 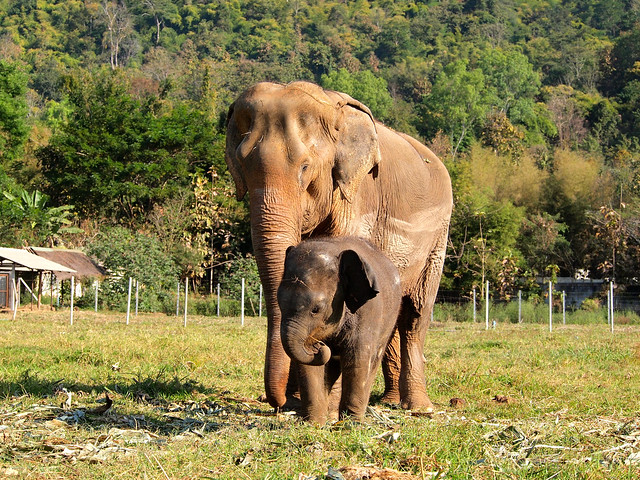 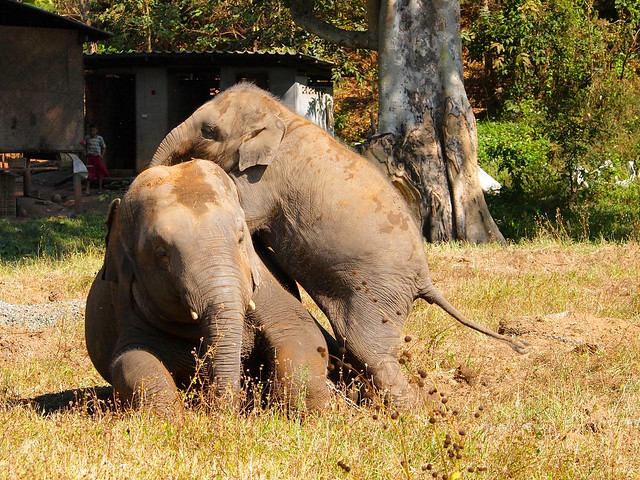 There are other plans, too. Like building enclosures for “the boys,” who, as they get older, pose risks to both tourists and injured female elephants at the park if they are allowed to be loose (Hope and Jungle Boy have already been responsible for fathering a few new tiny additions at the park, and even 18-month-old Navann likes to charge groups of volunteers and tourists). 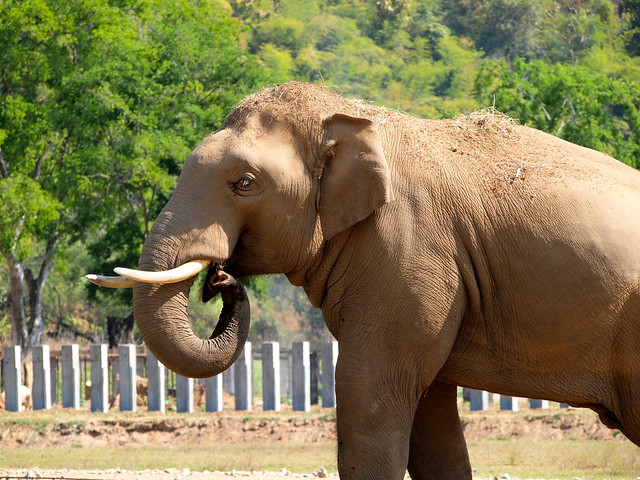 They also want to build more space for ENP's dog rescue program (which started by accident after Lek rescued 400+ dogs following the 2011 flooding in Bangkok and Chiang Mai), and Lek wants to try to start working with other trekking camps nearby to start new, elephant-friendly initiatives (like the Pamper a Pachyderm cooperative project).

When you hear Lek talk about where Elephant Nature Park is headed, you can tell she has big plans — but all those plans focus on the elephants, first and foremost. 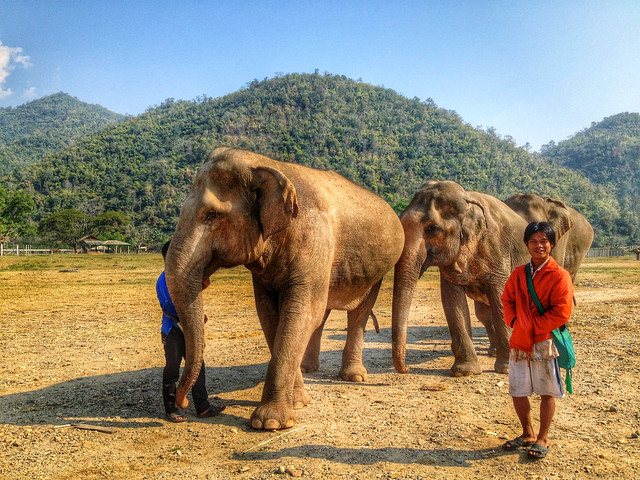 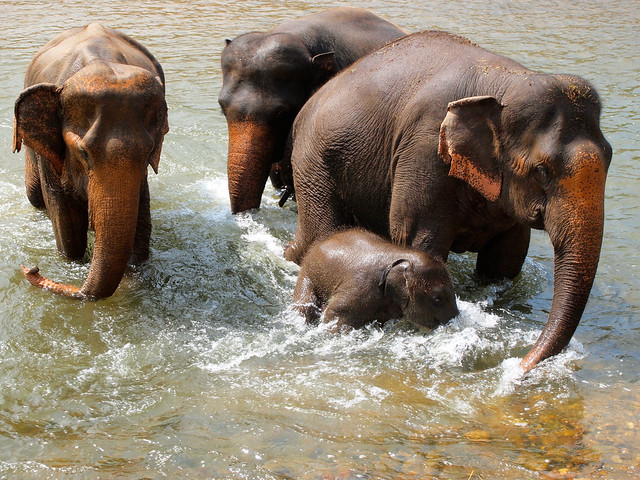 Personally, I can't wait to see how the park evolves in the future.

Save Elephant Foundation now operates elephant rescue programs in Thailand, Cambodia, and Myanmar, and also has projects dedicated to forest restoration, as well as the support of local hill tribe communities. Learn about all of SEF's projects here.

At Elephant Nature Park (easily the organization's most popular project), you can book a day trip from Chiang Mai, stay overnight, or even volunteer for anywhere from 1-4 weeks.

RELATED: Volunteering at Elephant Nature Park: What's It Really Like? 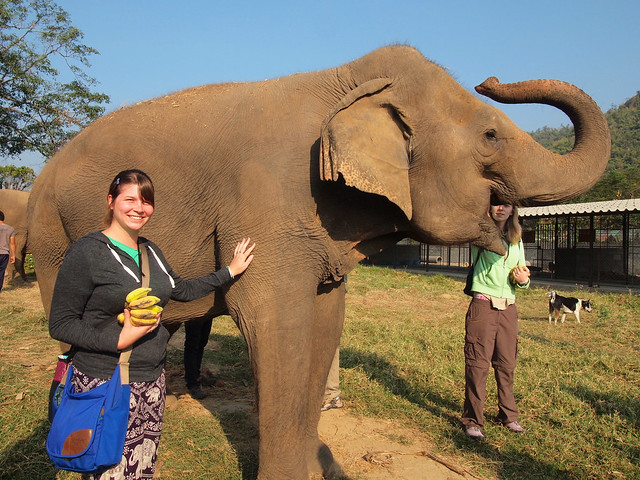 Is Elephant Nature Park a place YOU would like to visit?

39 Comments on “Get to Know Elephant Nature Park”