There’s no doubt about it — Doubtful Sound can give Milford Sound a run for its money.

Doubtful Sound, a misnamed fjord located on New Zealand’s South Island, may not be as popular or as well-known as the country’s crown jewel, Milford Sound. Milford is easily the country’s top tourist destination, and droves of people flock to cruise through its picturesque waters each year to gawk at its towering peaks and abundant wildlife.

But you know what? I think Doubtful Sound might actually be better.

Located further south in Fjordland National Park than Milford Sound, Doubtful Sound is just as impressive as Milford in any weather — but it’s far less touristed. And it’s also more fun to get to.

If you’re heading out on a Milford Sound tour from Queenstown, you’ll leave before dawn and take a 5+-hour bus ride along the Milford Road, cruise the fjord for an hour and a half, and then get back on a bus for more than 5 hours. Sure, the scenery is nice, but who wants to spend so much time on a bus in one day?

Conversely, a tour to Doubtful Sound consists of a 2-hour bus ride from Queenstown to the small town of Manapouri, where you’ll then hop on a boat for an hour-long cruise across Lake Manapouri. Even if the weather is bad (which it is 2 out of 3 days in Fiordland), this cruise is still scenic, with fog and mist and clouds wrapping around snow-covered mountain peaks. You may even sight a rainbow or two.

After the cruise, it’s a 30-minute bus ride up into the mountains, where you’ll head through the Wilmot Pass before descending into Deep Cove and the beginning of your Doubtful Sound adventure.

When my Real Journeys bus pulled up into Deep Cove on a chilly, rainy May morning, I couldn’t stop my jaw from dropping. The fjord stretched out before us — empty — with the forest-clad mountains on each side covered in hundreds of silver waterfalls. There was only one large cruise boat in sight, and it was the one that about 3 dozen of us were about to board for a 3-hour cruise. 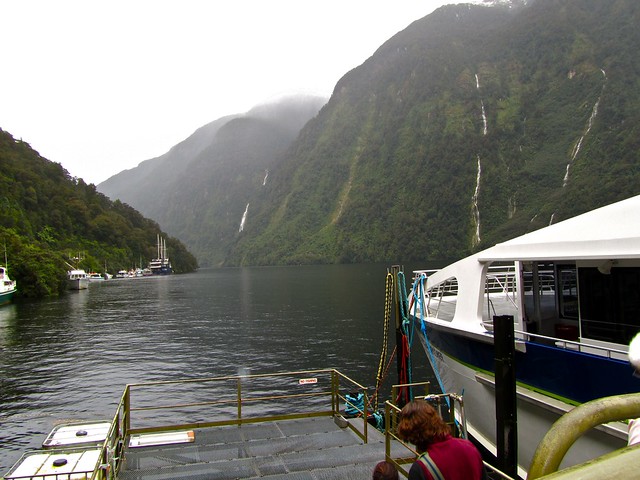 My memory of setting eyes upon Milford Sound for the first time is quite different. There, a row of cruise ships of various sizes await the hundreds of tourists that cruise Milford’s waters each day. Lines of buses wait to drop off and pick up passengers. And there’s usually some jostling to get that perfect shot of Mitre Peak, the most recognizable icon of Milford Sound.

How different Doubtful Sound was. How much more relaxed. It was like it was all ours for the day; we weren’t sharing it with anybody else. 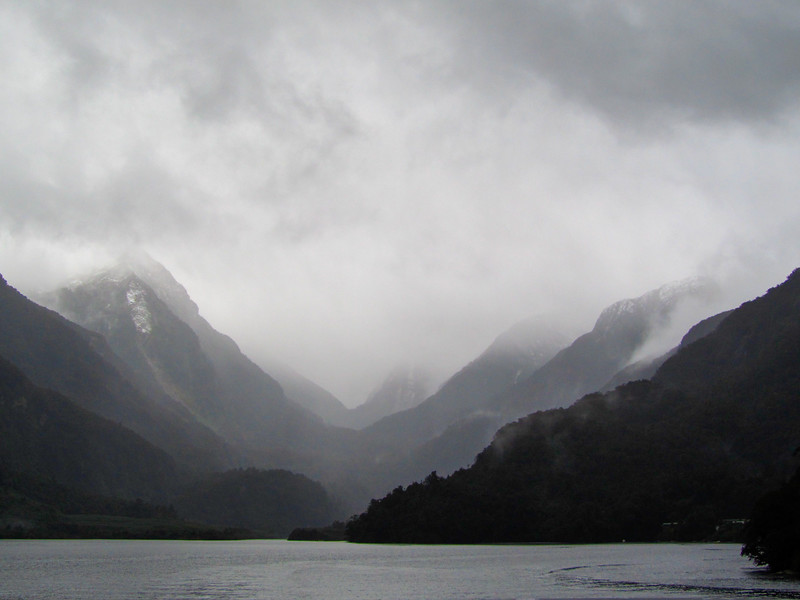 And this feeling persisted for the entire 3-hour cruise through the fjord. 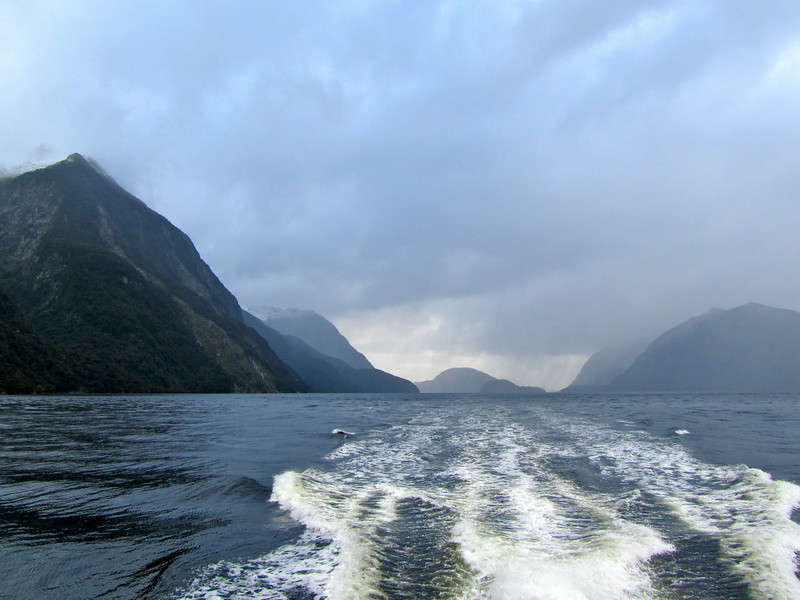 Doubtful Sound got its name in 1770, when Captain James Cook approached the inlet from the sea but did not enter it, citing that he was doubtful that it would be navigable in a sailboat. He first called it “Doubtful Harbour,” and it was renamed “Doubtful Sound” later by whalers and sealers, since it was clearly not a harbor (of course, it’s not actually a sound, either; it’s a fjord, having been carved out by glaciers).

While it was cold and foggy throughout most of our cruise, I couldn’t help exclaiming, “It’s so beautiful!” every 10 minutes or so. The rain and the fog made for a symphony of waterfalls cascading into the deep, tea-colored water, and I kept half-expecting a pirate ship or some other ghost to come sailing toward us through the mist. 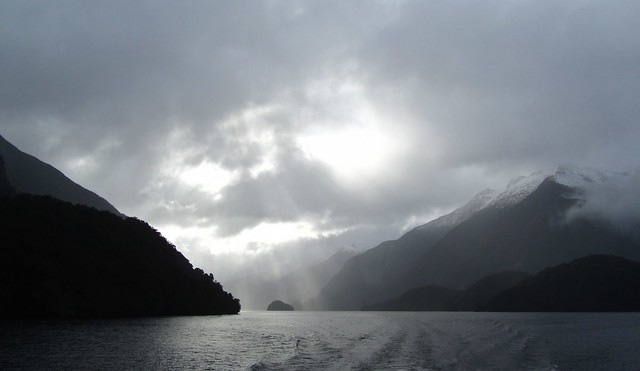 The Real Journeys boat that carried us through the fjord was large, with huge windows for good viewing, and outdoor decks that would have been perfect on a nicer day. Our guides through Doubtful Sound were knowledgeable about the fjord, and had good eyes, too — they spotted everything from albatrosses to fur seals, and tried to get us as close to the wildlife as possible.

And, throughout the whole afternoon, ours was the only boat sailing through the fjord. 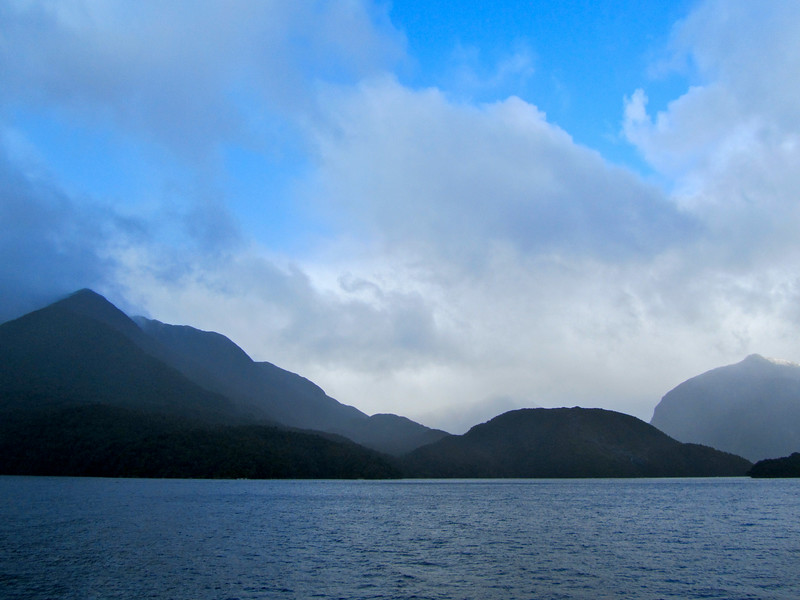 The cruise took us out through the Channel Islands, to where the fjord meets the Tasman Sea. The water there was extremely rough due to the bad weather, and I was glad I’d taken some Dramamine before boarding the boat. The skies above the Tasman were beginning to clear a bit, though, which made for some pretty dramatic photos. 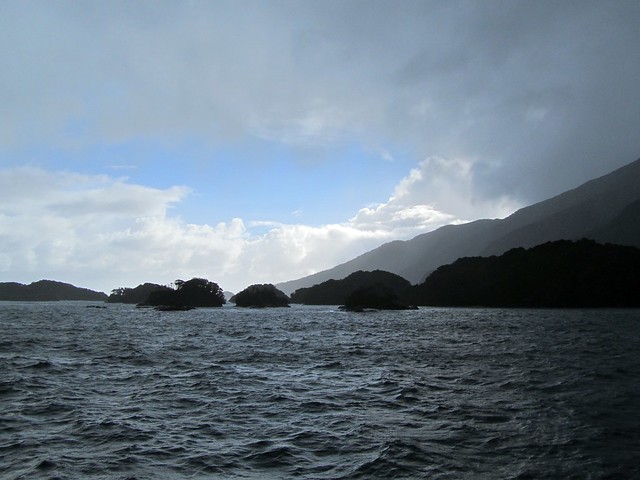 Unlike the quick cruises offered at Milford Sound, the Doubtful Sound cruise took things slow, venturing down each arm of the fjord in turn.

As we got into the impressive Crooked Arm, with waterfalls slipping down the steep cliffs in front of us and snow-dusted mountaintops peeking through the clouds in the distance, our boat captain cut all the engines. He asked everyone on the boat to turn off their cameras and wrap up their conversations. This was going to be a moment of silence, so we could truly appreciate the remoteness and beauty of Doubtful Sound. 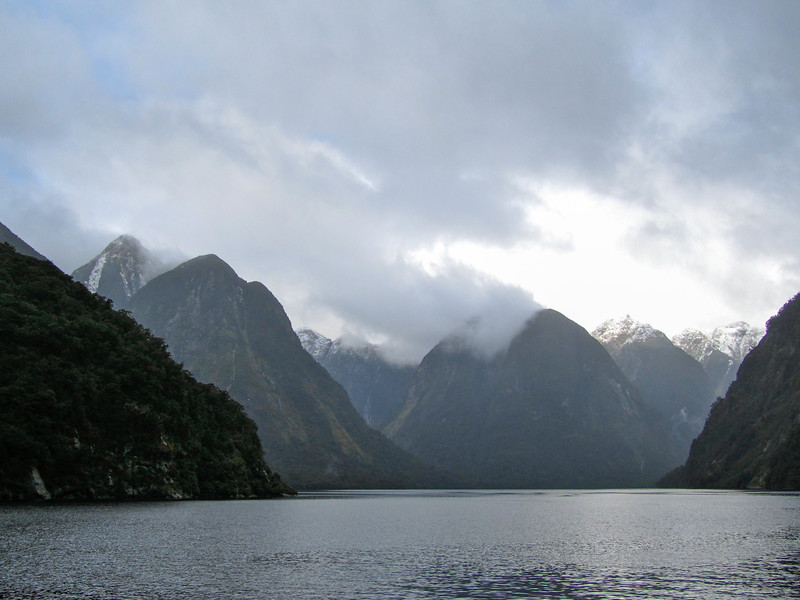 Once the engines stopped whirring, the only sounds were those of crashing water and birdsong high up in the mountain rainforests. 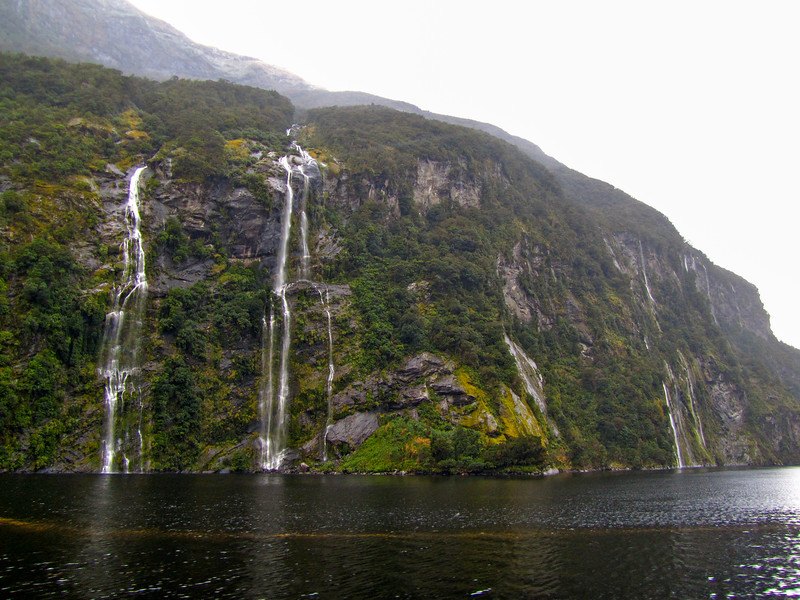 You certainly don’t experience this at Milford Sound. 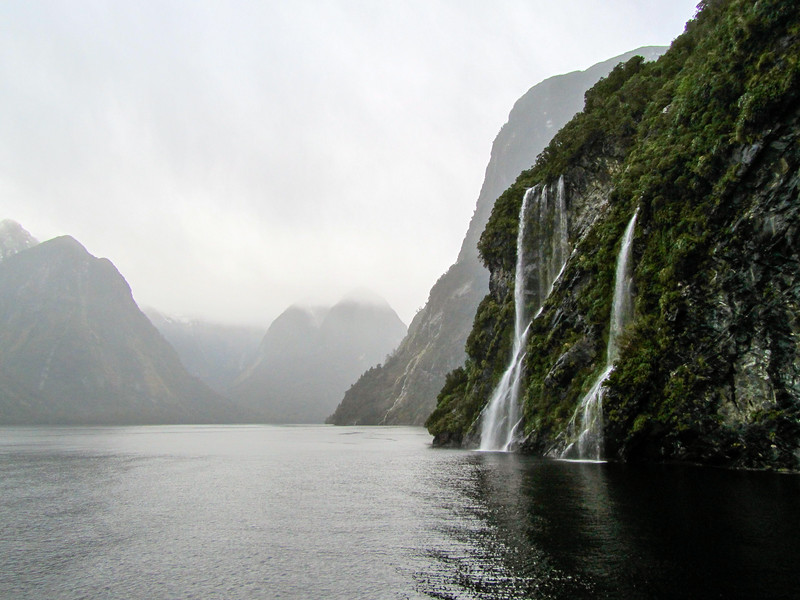 After our 3-hour cruise, it was back onto the bus for the 30-minute drive back through the Wilmot Pass to the shore of Lake Manapouri. The pass, at 2200 feet, is closed during the winter months, and was already dusted with a layer of snow in mid-May.

Before boarding our boat back to the town of Manapouri, we detoured into the Manapouri Power Station, which operates beneath the large lake. Getting to the power station consists of a bus ride through a long, hand-hewn stone tunnel that burrows deep into the rock under Lake Manapouri. Inside, we got a glimpse of the hydroelectric power station, which is the largest of its kind in New Zealand.

The skies, which had been fitful all day, began to clear as we headed back across Lake Manapouri, revealing craggy, snow-capped mountains and a brilliantly colorful sunset. It was the perfect end to a great day in the New Zealand wilderness.

While I certainly wouldn’t dissuade anyone from visiting Milford Sound (it’s beautiful and worth a look), I would appeal to them to also consider a trip to Doubtful Sound. Because, even though it’s often overshadowed by big brother Milford in all the tour brochures and online reviews, Doubtful Sound is spectacular. Woefully underrated, and spectacularly untouched.

If you want a less-touristy fjord experience in New Zealand, Doubtful Sound is the place to go. 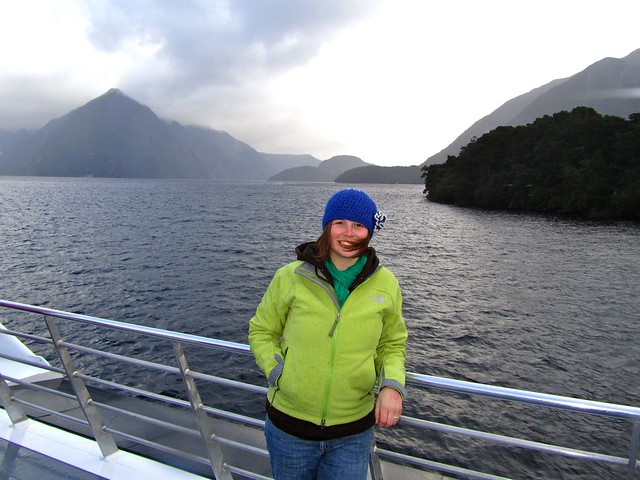 Keen to book your own tour to Doubtful Sound? (You do unfortunately have to book a tour; this isn't a trip that can be done independently.) Here are some tours to check out:

Which fjord would YOU visit in New Zealand? Have you visited one or the other already?

Disclaimer: Real Journeys (one of the only tour companies that cruises Doubtful Sound) provided me with a 50% discount on this trip. But, as always, all opinions are my own.