Amanda vs. Food – The Iceland Edition

I'm not a very adventurous eater.

I like the IDEA of being an adventurous eater, though, and so even if my stomach doesn't always appreciate it, I do try to push myself out of my comfort zone sometimes when it comes to food.

Reykjavik seemed like a great place to give myself one of those pushes.

Even though it's basically a Scandinavian country in nature, Iceland has some unique dishes that can both intrigue and disgust a person at the same time. And, while I wasn't brave enough to give the Hákarl (fermented shark) a try, I DID find the courage to try some other interesting dishes.

*Now here comes the caveat — Yes, I did eat some things in Iceland that are a bit controversial. If you're uncomfortable with that fact, feel free to stop reading now.

I knew I wanted to try some different foods in Iceland. But even though you can find things like whale and puffin and other Icelandic delicacies on just about every menu in town (seriously, look at first photo in this post), I didn't want to spend a lot of money on a meal I might not even like.

Thankfully, though, I didn't have to. Before I left for Iceland, I was sent a list of links to some well-known restaurants in Reykjavik. One that caught my eye was called Tapas Barinn. Located in a great spot downtown and with an Icelandic “tasting menu” of local specialties in tapas form, it seemed like a no-brainer. I headed down there on my second night in Iceland, ready to dive into both the normal and the strange and challenge my stomach to keep up. 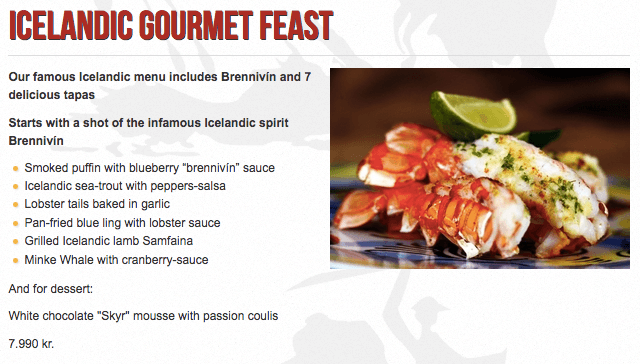 Here are my thoughts as I wrote them down as I worked my way through this tasting menu:

Often called “Black Death” by the locals, this spirit definitely packs a punch. I'm not much of a drinker (i.e. I don't really drink at all), but knew I had to at least take a sip of this spirit. It smells and tastes like black licorice, which I actually quite like. It burned a bit on the way down, but wasn't half bad. Granted, I'm sure I would have died if I'd taken the whole shot. 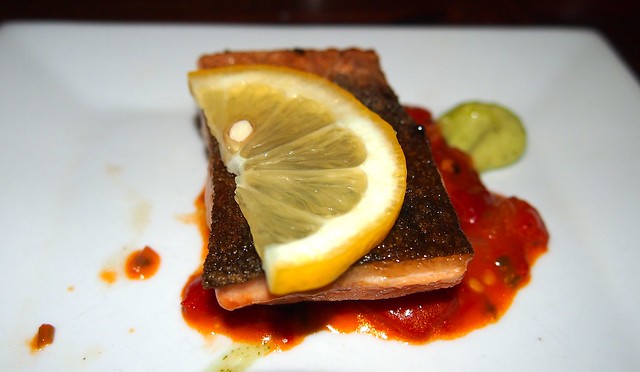 My tasting menu started with the trout, which was a great way to start the meal. The fish was cooked perfectly, with a deliciously crunchy skin that was seasoned just right. 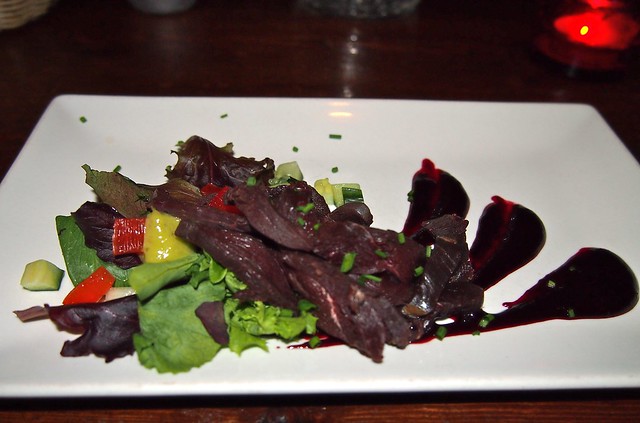 I still can't believe they eat these adorable birds in Iceland. I went back and forth over whether I'd try it or not, and finally decided to give it a go. Puffin are hunted annually in Iceland and the meat is served throughout the year — if I didn't eat it, someone else would. The dark meat was prepared quite rare (it's the brownish-purple stuff on the plate) and reminded me a bit of very salty duck. I don't really like duck, and so didn't care for the puffin at all. 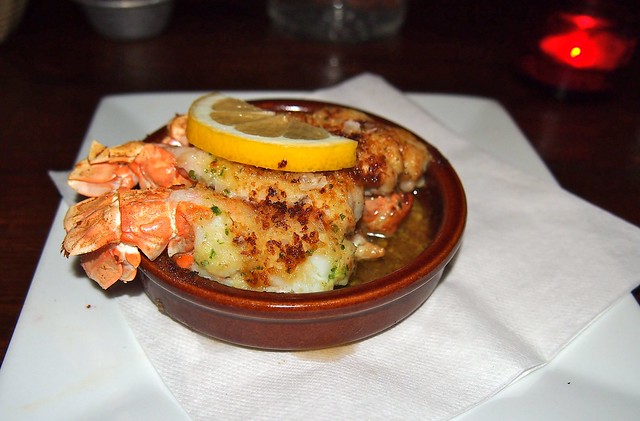 OM NOM NOM. Easily my favorite tapas dish on this night. The meat almost fell out of the tails, and had just the right combination of garlic and butter on top. I was sad they only gave me 3. 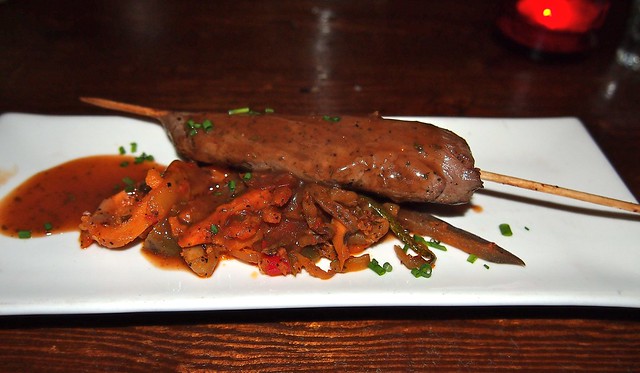 I don't eat much lamb, but I was told by an Icelander that the lamb here is more “gamey” than in other countries. It did have a slightly more “wild” taste to it, but the gravy helped mask it. The lamb here was fairly tender, and I ate most of it. 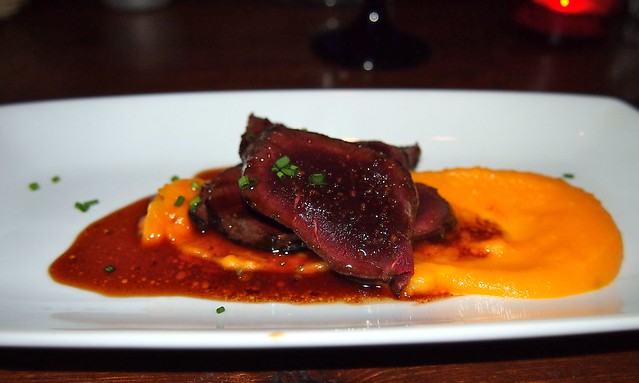 Here's where you'll all berate me and tell me I'm a terrible person. Yes, I ate whale. Iceland is one of the few countries in the world that still allows commercial whaling, though they do now have limits placed on how many whales can be caught each year. It's also worth noting that these minke whales are not endangered, and are hunted humanely. That being said, I thought whale meat was disgusting. It was sliced very thin and cooked very rare, and had a strange floppy, mushy texture to it that made me want to gag. 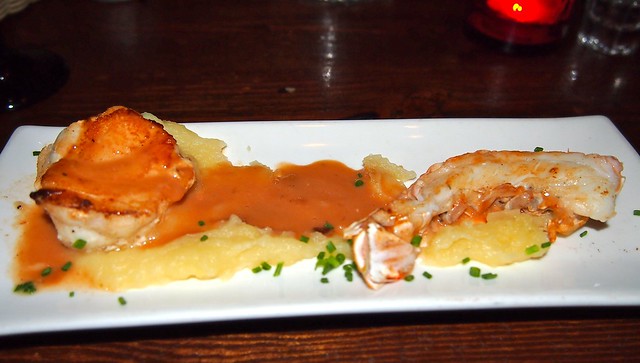 The best part of this dish for me was the mashed potato side. Something about the consistency of the monkfish put me off — it was almost creamy and kind of sweet. It didn't taste much like seafood, and I wasn't really a fan. 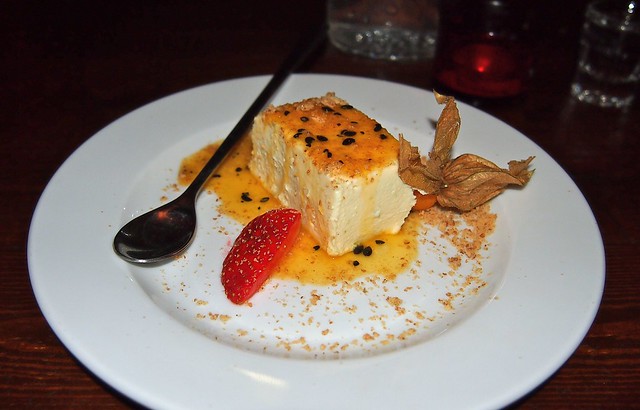 Very similar to Greek yogurt, Skyr is a popular breakfast, snack, and even dessert food in Iceland. The Skyr here was contained in a white-chocolate mousse and doused in passion fruit syrup. The mousse had a consistency almost like cheesecake, but wasn't very sweet. If not for the passion fruit sauce, I don't know if I would have cared for it much.

After my night of adventurous eating, I opted for something a bit safer the next evening. I met up with two Australian girls who had been on my Golden Circle tour the day before, and we headed down to the old harbor to find the Sea Baron. This little restaurant has a great story behind it — located in an old fisherman's hut on the harbor, the restaurant was started by fisherman/former Coast Guard chef  Kjartan Halldórsson. Old silly photos of him line the walls, and the place has a very cozy feel to it. It feels like you're just having dinner at Kjartan's house.

It also serves up some of the freshest, most delicious seafood in Iceland. 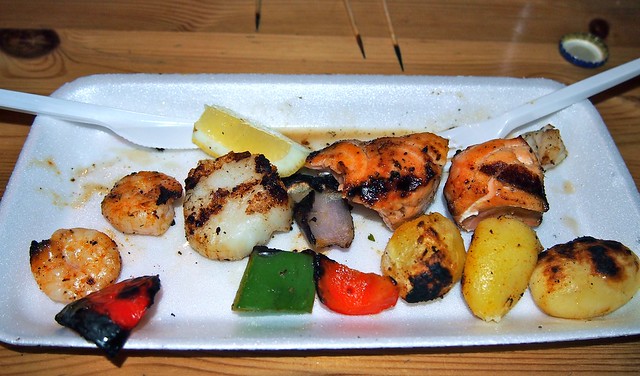 The Sea Baron is known for its lobster soup, but also does a mean seafood kebab. You walk into the restaurant, take your pick of various raw kebabs on offer, and then they grill up your selection for you on the spot. We got salmon, redfish, shrimp, and scallops, along with potatoes and peppers — and it was all SO GOOD.

And, of course, no trip to Reykjavik could possibly be complete without a hot dog. 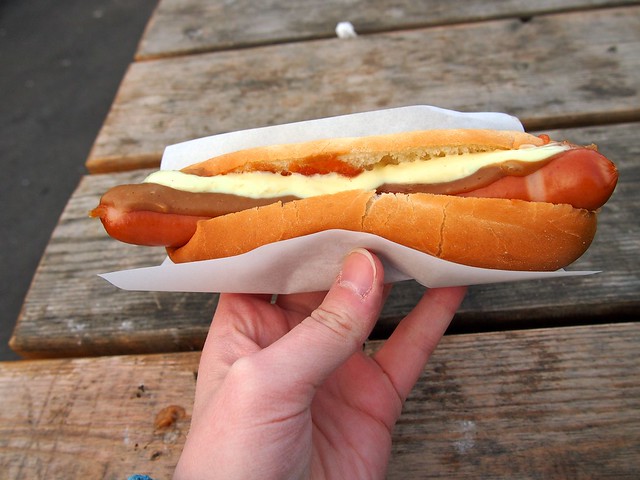 Down by the harbor, a little cart always has a huge line. This is Bæjarins beztu pylsur — which literally translates to “the best hot dog in town.” Operating since 1937, this little hot dog stand has also been named the best hot dog stand in all of Europe, and the hot dogs here are often referred to as “the Icelandic national food.” Clearly, it was worth trying. 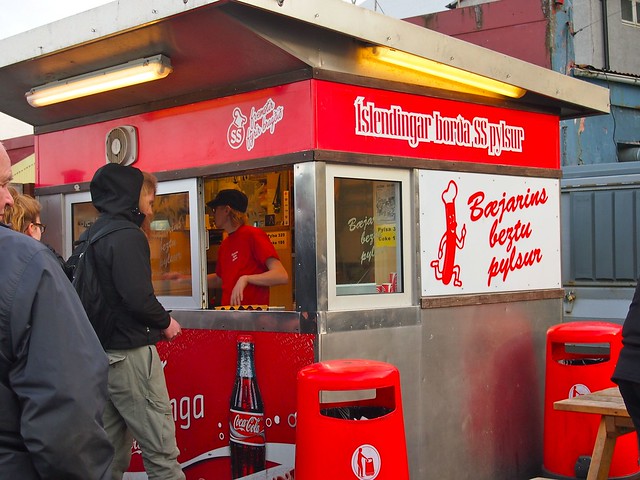 On my last night in town, I sought out this stand and enjoyed a hot dog with all the fixin's — ketchup, sweet mustard, fried onion, raw onion and remolaði, a mayonnaise-based sauce with sweet relish. It was delicious; definitely the best hot dog I've ever eaten.

And, while I didn't eat anything more adventurous than a caramel-filled muffin at this bar/cafe, The Laundromat on Austurstræti is just a really cool place to hang out in downtown Reykjavik. With a funky vibe, lots of color, and a diverse menu that even includes cannelloni, I went here 3 nights in a row, mostly just for the atmosphere. It was the type of place I didn't feel weird going into on my own, and I was always able to strike up a conversation with someone at a nearby table.

The Laundromat also offers free wi-fi and is friendly towards breast-feeding mothers (which they are very proud of and advertise prominently outside). 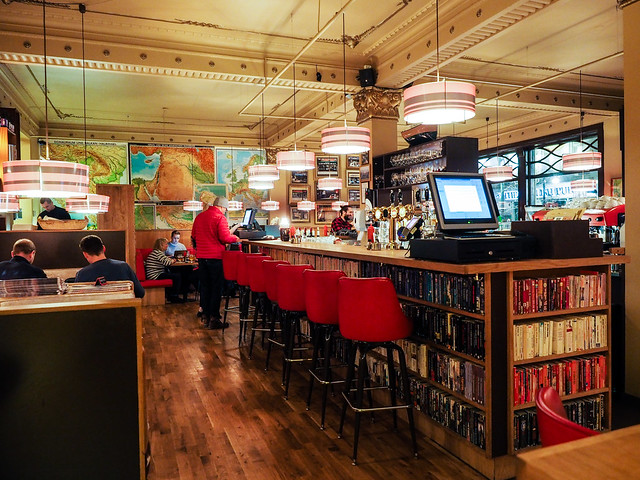 Reykjavik is known for its nightlife, but if you're like me and enjoy something a bit more low-key, I highly recommend The Laundromat!

What do you think of my eating escapades? Would YOU try some of these things in Iceland?

87 Comments on “Amanda vs. Food – The Iceland Edition”