How to Spend 2 Days in Cincinnati, Ohio: A Guide to the Queen City

Home » United States » Ohio » How to Spend 2 Days in Cincinnati, Ohio: A Guide to the Queen City

It's a conversation I often have when I'm traveling: the “so where are you from?” conversation. And, weirdly, when I tell people that I'm from Ohio, there always seems to be a good chance that the person I'm talking to will respond with, “Oh, I went to Cincinnati once!“

This always used to surprise me before I spent much time in Cincinnati myself. But of course, if you've ever been to Cincinnati, you'd know that this isn't really surprising at all.

Cincinnati, with its rich history, great beer scene, and long list of things to do, is a great Ohio city for anyone to visit.

The city of Cincinnati sits at the confluence of the Licking and Ohio rivers in southwest Ohio, right across the state line from Kentucky. The city was settled in 1788, and quickly became a “boom town,” growing rapidly in both population and wealth.

In fact, by the mid-1800s, Cincinnati was one of the largest and most prosperous cities in America thanks to the steamboat and pork processing trades. It became known as “The Queen of the West,” or simply “The Queen City,”

The city has a few other notable claims to fame, too, like…

The boom years of Cincinnati faded after the Civil War, and the economic downturn that affected many other rust belt cities 100+ years later hit Cincinnati hard, too.

But, just as cities like Pittsburgh and Cleveland and Indianapolis have been turning the tides of their city narratives in recent years, so too is Cincinnati.

Cincinnati is a great destination to spend a long weekend. It's easily reachable from several major Midwestern cities (it's within 4 hours from places like Cleveland, Columbus, Indianapolis, Louisville, and even Nashville and Detroit), and has plenty of things to keep you busy.

Even if you visit over a cold, wet weekend like I did, you'll still find plenty of things to do in Cincinnati in 2 days.

Here is just a sampling of what there is to do in Cincinnati over a weekend:

During the Civil War (and in the years leading up to it), Cincinnati was a border town in Ohio (a free state) across from Kentucky (a slave state). The city unsurprisingly played a huge role in both abolitionism and the Underground Railroad.

The story of slavery in America is told at the National Underground Railroad Freedom Center, which is a fantastic museum right on the river in downtown Cincinnati.

The museum doesn't just focus on the early days of America, though. According to its mission statement, the museum's goal is to “reveal stories about freedom's heroes, from the era of the Underground Railroad to contemporary time, challenging and inspiring everyone to take courageous steps to freedom today.”

Along with large exhibits on the slave trade in the Americas and the Underground Railroad, the museum also has exhibits on modern-day slavery and the fights for freedom that are ongoing in our world today.

This is a must-visit in Ohio!

No visit to Cincinnati would be complete without spending some time in the city's Over-the-Rhine neighborhood, where you can experience the city's German influences.

My favorite stop in this part of the city is the Findlay Market, which is the city's oldest open-air public market, dating back to 1852. The market building is on the National Register of Historic Places, and inside you'll find fresh produce, meats, and pastries year-round.

You can even take a tour of Findlay Market while you're there.

Findlay Market is located in the aptly-named Brewery District, a part of the historic Over-the-Rhine neighborhood that once was home to the largest collection of pre-Prohibition-era breweries in the country. Today, there's an entire Brewing Heritage Trail here, plus plenty of working craft breweries to discover.

Some favorites include Rhinegeist Brewery (which offers both historic tours and tasting tours), Northern Row Brewery & Distillery, and Taft's Ale House (which is located in a renovated 1850s church).

There are also some unique tours you can take in Cincinnati that include touring local brewery caverns and underground tunnels. This tour also includes a beer tasting.

I'm a huge fan of street art, and it turns out that Cincinnati is a great city for murals. An organization called ArtWorks was tasked by Cincinnati's mayor about a decade ago to create a mural in each of Cincinnati's 52 neighborhoods – and they are well on their way to doing that and more.

Even just around the downtown area, you can find all sorts of cool and colorful murals.

ArtWorks has a map of all its murals you can download if you want to see them on your own, or you can join them on a mural walking tour on weekends.

If you think the John A. Roebling Suspension Bridge looks familiar, that's because it was designed by the same guy who would go on to build the Brooklyn Bridge in New York City.

Cincinnati's Roebling bridge was completed in 1867 and at the time was the longest of its kind anywhere in the world. Today, the bridge connects Cincinnati to the city of Covington, Kentucky.

A museum of signs might not immediately sound exciting, but I promise that the American Sign Museum in Cincinnati is worth the time and the admission fee. The museum takes visitors through 5 decades of sign-making, from the gold leaf signs of the early 1900s, to the neon signs of the '30s and '40s, to the funky plastic signs of the 1950s.

One large room in the museum is set up to look like a 1950s-era main street, completely decked out in all manner of colorful, blinking, and spinning signs.

The museum offers free tours Wednesday-Sunday, and even has a working neon shop inside. Of all the things to do in Cincinnati, this is probably my favorite!

Other museums worth visiting in Cincinnati include:

Cool tours to take in Cincinnati

Looking for a more guided look at the history and food of Cincinnati? Here are a few tours to consider:

If you have one more day

Making a long weekend out of your visit to Cincinnati? Then I would suggest driving a little north of the city to Butler County, where you can find some other really unique things:

I LOVE this concept – not only does it allow you to eat some delicious donuts that don't come from Dunkin, but it's also a fantastic way to promote and support local businesses, some of which have been around for generations.

Head up in the morning and hit up a few stops on the trail (I really liked Kelly's Bakery and Jupiter Coffee and Donuts), but just be aware that many of these shops do close as soon as they sell out of fresh donuts!

Google Jungle Jim's, and you'll be told that it's a grocery store. But I'm here to tell you that this 6-acre behemoth is so much more than just a grocery store!

Jungle Jim's is a tourist attraction in its own right, with its funky decorations, giant cheese tower, and more than 180,000 food items from around the world. Go for the spectacle, and stay to fill up a shopping cart!

The original Jungle Jim's is in Fairfield, north of Cincinnati. But they recently opened up a second store in Eastgate, much closer to downtown.

Where to stay in Cincinnati

Looking for a great place to rest your head for your trip to Cincinnati? Here are the hotels I would recommend:

Not only is this hotel located smack dab in the middle of downtown (within walking distance of many local attractions and restaurants), but it's also located in an historic building that used to be home to the Cincinnati Enquirer. If you like historic touches along with large and comfortable hotel rooms, then this is the place for you.

2. Aloft Newport on the Levee

If you're looking for a more budget-friendly option, head across the river into Kentucky. I love the Aloft Newport of the Levee. Aloft hotels in general are modern and a little funky, and this one is also within a few steps of dining, shopping, and the Newport Aquarium.

3. Book an apartment or condo

There are plenty of cool vacation rentals around Cincinnati to choose from, whether you want to stay right downtown or a little further out.

Some of my favorite rental options in Cincinnati include:

Have you ever considered Cincinnati as a tourist destination? If not, will you now? 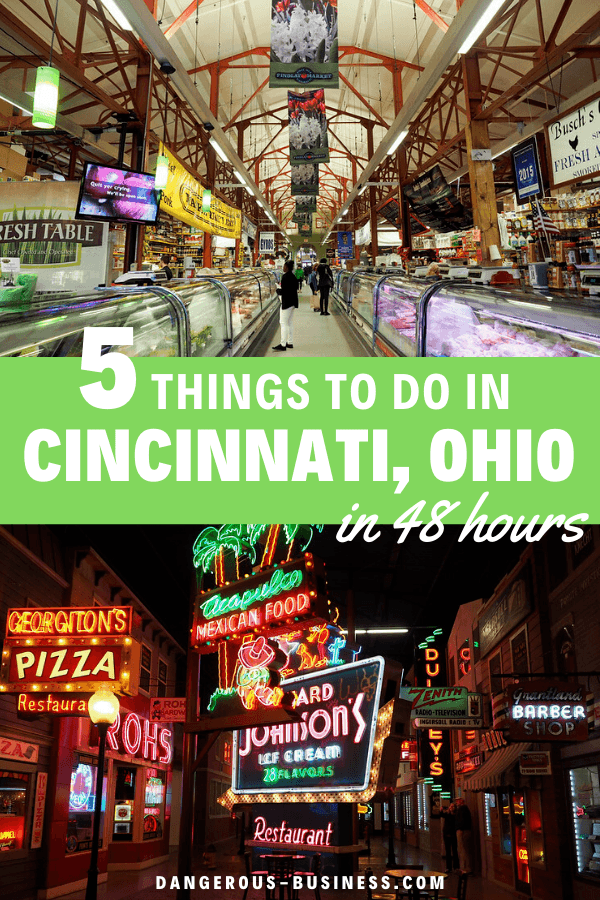 56 Comments on “How to Spend 2 Days in Cincinnati, Ohio: A Guide to the Queen City”